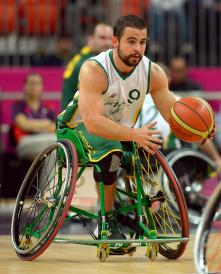 The Australian Rollers are the 2014 IWBF World Wheelchair Basketball Champions after defeating the USA 63-57 in the final to secure back-to-back titles in South Korea today.

In a game fitting of a World Championship final, the Rollers started fast, but were pegged back by the USA and would eventually surrender the lead in the final quarter before producing down the stretch to claim their second consecutive World Championship crown.

Australian Rollers Head Coach Ben Ettridge praised the performance of his players, dropping only one game for the tournament (against the USA) and producing their trademark defence when it mattered most.

“I’ve got the 12 best guys in the world and I’m so happy for them. I’m proud of the guys, they’re amazing and they have done a great job.

“We pride ourselves on our defence and that’s what won it. Every time we play defence it’s a war and today we gave them nothing. We made them shoot from the perimeter and it was our defence that won it.”

The Australians came into the final knowing if they were to win gold they would need to overcome the only team that had inflicted defeat on them in the tournament.

They started in the best manner possible, racing out to a 22-13 lead at the end of the first quarter, which ballooned out to 12 points (the biggest margin of the game) on the back of a Tristan Knowles three-point bomb to start the second quarter.

This lead was slowly whittled away by the USA, who kept the Rollers to just nine points for the quarter – eventually cutting the lead to four points at the main interval at 31-27.

It was all USA after the break, as they took the lead for the first time in the game midway through the third quarter. The Rollers showed their poise and managed to regain the advantage 45-43 heading into the final quarter of the tournament.

Once in front, the Rollers never surrendered the lead, going on 13-7 run in the final five minutes to secure the victory and ensure this Australian team will return to home shores as the World Champions.

For all the latest news, results and info from the Australian Rollers be sure to visit the BA website at basketball.net.au.