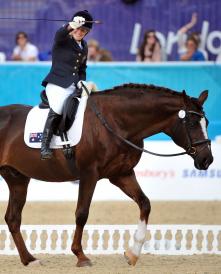 Australia’s Para-Equestrian Team for the 2014 FEI World Equestrian Games (WEG) has been announced and all four selected riders will make their WEG debut at Normandy.

Although it will be the first World Equestrian Games for each rider the team is not lacking experience with Paralympic Gold Medallist Joann Formosa among the four strong team making the trip to France.

The four riders and their horses in alphabetical order are:

Nicole Blanks and Vledder (Grade 4) Nicole earns her position on the Australian Team with strong performances at overseas events including Moorsele (BEL) CPEDI3* where she attained scores of 69% in the team and individual championship tests. When she is not riding 24 year old Nicole is currently completing a medicine degree.

Chelsea Higgins and HP Comedian (Grade 3) Chelsea was recently a finalist in Equestrian Australia’s domestic athlete of the year award category. Chelsea and her mount HP Comedian achieved a personal best score of 70.85 in the individual championship test at the final Para-Equestrian nomination event in February this year. Chelsea will celebrate her 20th birthday during WEG.

Elizabeth Sobecki and Hatero DE PB (Grade 3) Elizabeth was part of an Australian team that competed at the 2012 Hong Kong CPEDI3*. Also in 2012 she was named the Australian team’s non-travelling reserve ahead of the London Paralympic Games. Although Lizzie’s partnership with Hatero DE PB is relatively new, the pair has gone from strength to strength improving with each outing in the three round Para-Equestrian nomination series held between November 2013 and February 2014.

Australia’s Para-Equestrian Team will depart for Normandy on 14th August.