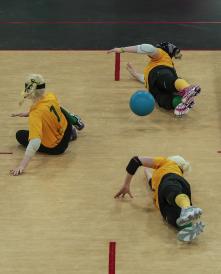 The Australian Belles have bowed out of the 2014 IBSA Goalball World Championships after losing their final qualification game overnight in Espoo, Finland.

The Belles (ranked 11th in the world) needed to defeat the Ukraine (ranked 19th) by three goals or more to seal a place in the quarter-finals, and despite entering the match as favourites, the task proved too tough.

Instead, the Ukrainians converted their 3-0 half-time lead into a comprehensive 7-2 victory.

The disappointing defeat ensured the Australians finished fifth in their six-team pool, with the top four teams (Brazil, China, Ukraine and Israel) moving through to the next stage.

Russia, the United States of America, reigning Paralympic champions Japan and undefeated top qualifier Turkey progressed from the other pool.

Australian coach Peter Corr admitted that while his team will gain a lot of confidence from mixing it with some of the world’s best players, it was frustrating to finish with such a disappointing display.

“Our team went into the game quietly confident and determined but the Ukraine just applied too much pressure and found a way through,” Corr said.

“Our players fought it out to the final whistle and despite the disappointment, the experience we gained was invaluable.

“I have no doubt that the program can continue to improve and we will keep focussing on preparing for a strong Rio campaign.”