Can the Belles progress at Goalball World Champs? 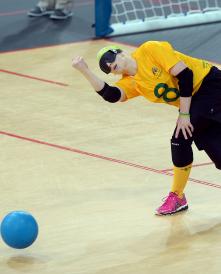 Excellent performances against China and Sweden overnight have given the Australian Belles a lifeline at the IBSA Goalball World Championships in Espoo, Finland.

Although the Australians were defeated 2-1 by China, their narrow losing margin against the world number two team and a comprehensive 4-1 victory over Sweden just hours later ensured that the Belles’ hopes of progressing to the quarter-final stage remain alive.

Currently fourth in their six-team group, the Belles now must defeat the Ukraine in their final qualifying round match tonight AEST. Victory will see the Belles finish in the top four and will send them through to the knockout stage. However, a defeat will take their destiny out of their own hands, with other results and goal differences set to determine their fate.

The Australians will take plenty of confidence into the Ukraine match on the back of two excellent defensive performances against the Chinese and Swedish outfits which won silver and bronze respectively at the London 2012 Paralympic Games.

Remarkably, the Belles held China scoreless until deep into the second half when the Paralympic silver medallists finally broke the deadlock with two quick goals. Meica Horsburgh managed to scored late for Australia.

And it soon became obvious that the narrow loss against the world heavyweights had inspired the Belles in their match against Sweden, with Nicole Esdaile (two goals) and Horsburgh finding the net to give Australia a 3-0 half-time lead. Horsburgh scored the only goal of the second half to seal victory.

“I think we have emerged from the shadows of world goalball and showed that we can compete with the best in the world,” Corr said.

“It was a daunting prospect facing the current Paralympic silver and bronze medallists in the one day, but our team stood proud.”

“It was an outstanding defensive effort to hold China to their lowest score in the tournament and it was terrific to back up and defeat Sweden, a team that we had never beaten.

“We have now given ourselves an opportunity to make the quarter finals by beating the Ukraine so bring it on.”