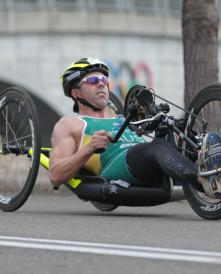 Despite taking a wrong turn on the bike, four-time ITU World Champion Bill Chaffey recovered to lead Australia’s Paratriathletes to a triumphant day at the 2014 ITU Paratriathlon event in Chicago.

It was Chaffey’s day to shine. The 38-year-old showed why he is regarded as one of the world’s finest Paratriathletes with a commanding gold medal performance over his seven opponents in the PT1 Class – all Americans.

Chaffey has been a paraplegic since a 2005 bike accident involving a truck left him with four broken bones in his back, a smashed elbow and pelvis.

“Bill led the swim out of the water and maintained this for the bike although he did make a wrong turn and lost a small amount of time,” said Australia’s Paratriathlon coach Corey Bacon.

“But he recovered and went on to blitz the field, maintaining his lead to record a comfortable win.”

Adding to Australia’s medal tally were Yokohama ITU winner, WA’s Brant Garvey who won silver in the PT2 class and 2012 London Paralympian in track and field, Jack Swift who won bronze in the PT4 Class.

While Canberra’s visually impaired Jonathon Goerlach was a luckless fifth in the PT5 class after suffering a five-minute delay with a puncture.

“Jack Swift although suffering with the flu for the past two days was about fifth out of the water with Brant not too far behind,” said Bacon.

“Both boys were in and out of transition pretty quick with Brant having his fastest transition in his short triathlon career, improving by over a minute on his previous transitions.

“After a good ride, Jack was off the bike and in and out like a flash, sitting about fourth overall. Brant was in and another quick transition.

“Jack had a great run considering how he was feeling to finish third while Brant continued his good form to finish second.”

The hard luck story of the day came in the PT5 category with Jonathan Goerlach and his guide Jack Bigmore experiencing an unfortunate puncture four minutes into the bike leg.

“Jack had to run one kilometre down the road to the wheel change over area to get their spare, losing up to five minutes to their competitors.” said Bacon.

“It didn’t take the boys long to start catching their competitors one by one but it wasn’t enough to get on the podium bit they were still able to run into 5th place.”

“It was a great event and fantastic performances by all the athletes. Certainly well deserved results,” said Bacon.