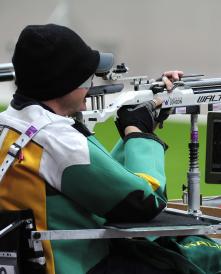 Mark shot a top score of 631.6 in Air Rifle Standing, and after a very exciting final, finished with the silver medal. Fellow team member Luke Cain (Boneo, VIC) made the final in this event and finished in sixth position.

The Aussie team of Mark, Cain and Jason Maroney (Wangaratta, VIC) claimed the silver medal in the same event, behind Great Britain who took the gold.

Mark maintained his winning form in the next event, claiming the bronze medal in Air Rifle Prone in another exciting final. Mark had qualified for the final with the sixth highest score of 633.

On the final day of competition, Libby Kosmala (Keswick, SA) displayed impressive shooting in Air Rifle Standing with the third highest score of 408.1, finishing the final in fourth position.

Earlier in the tour, team Australia produced some of the best scores at the International Shooting Competitions of Hannover (ISCH), with three individual medals, two team medals, many finals’ berths earned and several records set.

The event also saw 2014 London World Cup gold medallist Maroney setting a new World Record, after shooting a score of 641.6 in Air Rifle Standing. Maroney is the first athlete ever to achieve a score of over 640. He finished fourth after a good final.

National EAD High Performance Coach Miro Sipek said that the team is in strong form leading into the IPC World Championship in July.

“Bradley, Jason, Ashley and Chris Pitt (Bundaberg, QLD) will now compete at the next IPC World Cup in Fort Benning, which is the last international competition before the World Champs.”