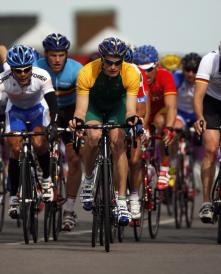 Cycling Australia is pleased to announce the team for the 2014 UCI Para-cycling World Road Championships to be held in Greenville, USA from August 28 –  September 1.

Over 400 of the world’s best Para-cyclists from approximately 40 countries are expected to contest the individual time trial and road race disciplines for men, women and teams during the five-day Championships.

Carol Cooke (VIC), dual reigning world champion in the women’s T2 classification, will look to defend her crowns in both the time trial and road race.

Dual 2011 road world champion Sue Powell (ACT) will look to add to her medal tally which included two bronze in 2013.

Australia has already enjoyed tremendous Para-cycling success in 2014, finishing as the most successful country with 17 medals, including five rainbow jerseys at the 2014 UCI Para-cycling World Track Championships held in April in Mexico.

Reigning track world champions who will head to the Road Worlds include Gallagher and Powell, plus Jayme Richardson (NSW) and the Men’s Tandem combination of Matt Formston (NSW) and pilot Michael Curran (NSW).