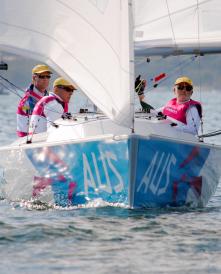 A British protest over the French team ensured the gold and silver medals were decided in the Jury Room as the two bullets secured by the French were scored a discretionary 20% penalty.  The French came away with a pair of 3DPI scores whilst the Britons second and fourth meant they took gold.

This did not affect third place of the Australians, who were pleased with their result as dual Paralympian Colin Harrison confirmed after the race:

“It’s always good to finish on the podium, especially in this fleet and we are very happy with that.  We’d like to be a little bit higher up but that’s going to take time and we’ll keep chipping away until we get there.”

In the eight boat fleet battles were tight over the week and going into the final medal race there was very little room for error as four points separated the top four racers with the Australians in third position.

As Colin Harris explained:  “The competition in our event is always very tight.  There’s six to eight countries which always fight for the podium spots and every team here has either won a gold medal in the Paralympic Games or World Championships so it’s a very tough fleet, always close and always good fun.  Today it all came down to the last race where we had four teams including ours in contention for the podium places.”

It was a first time racing experience for the Australian Sonar Team in Hyères, which they quite enjoyed:

“It was our first time racing in Hyères and it was exciting to come to a new venue and get to grips with all the challenges a new location brings.  It’s a fantastic venue and we’ve really enjoyed the whole week.”

The Australian team will race next at the Delta Lloyd Regatta in the Netherlands (20-24 May 2014) before they return back to Australia to train in preparation for the IFDS World Championships in August.