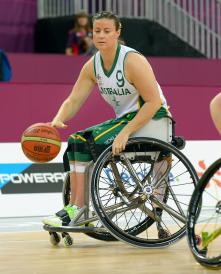 The Australian Gliders women’s national wheelchair basketball team have named a 20-player squad to be considered for the final team for the 2014 IWBF Women’s World Wheelchair Basketball Championships to be held in Toronto, Canada in June.

Gliders Head Coach Tom Kyle has called upon 10 players from the team that claimed the silver medal at the 2012 London Paralympic Games to form the nucleus of the squad that will lead the Gliders.

Returning to Australia after last month’s tour of Canada and the USA, Kyle said the opportunity to build depth among the Gliders ranks would help the team in Toronto and beyond.

“I wanted to build the depth of our squad to increase competition within the group, which will strengthen us towards becoming a powerhouse of women’s wheelchair basketball,” Kyle said.

“Depth leads to pressure on all positions to perform, which in turn leads to long term sustainability of the program.

“Extending the squad is an opportunity to expose more players to the program and ultimately we get more players to understand the processes, expectations and culture of the Gliders, which will assist us down the track when these players attend major competitions.”

The 10-game tour of Canada and the USA tipped off the Gliders’ preparations for the World Championships, continuing a busy schedule over the coming months sure to have the team ready to take on the world’s best.

The next step in the pre-Toronto schedule will see the Gliders face NWBL teams in May before heading to Europe for a series of warm-up games and final hit outs.

The European tour will take in Germany and the Netherlands before departing for Canada and their chance at winning the Gliders first World Championship medal since 2002.

A tough pool awaits the Gliders in Toronto, with Netherlands, USA, Mexico, Peru and France.

The 2014 IWBF Women’s World Wheelchair Basketball Championships to be held in Toronto, Canada from 20-28 June.

For the latest information on the 2014 IWBF Women’s World Wheelchair Basketball Championships visit the official tournament website at http://2014wheelchairbasketball.com