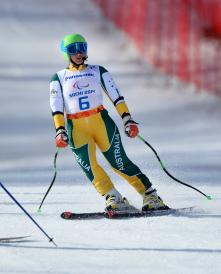 VISION-impaired skier Mel Perrine blames herself for not staking a claim for a medal on the slopes of the Sochi Winter Paralympic Games in the women’s Super-G today.

Perrine said it was totally her fault that she and guide Andrew Bor missed Gate 29 on the 38-gate Super-G course at Rosa Khutor Alpine Centre.

“There are no excuses on that one. I made a mistake, I skied poorly. It’s completely on me and I’ve got to live with that. I’ve got to change it for tomorrow,’’ the 26-yearold from NSW said, with her bottom lip quivering as she spoke.

“I didn’t commit to the turn and as a consequence I missed the next gate and there is no one else to blame but myself on this one.’’

Perrine was the last of the six women in the V.I. (vision-impaired) class to negotiate the 1,800 metre-length course.

She had pushed Perrine into fourth position in the women’s Downhill on Saturday.

“It seems to be that way, yeah,’’ Perrine said, when asked if she felt disappointment was stalking her in Sochi.

“It was hesitation (today) and you don’t have time to hesitate out there. I hesitated and that was my mistake. I shouldn’t be doing that, I’ve trained not to do that, but you know, that’s what happened.’’

Australian team head alpine coach Steve Graham wasn’t certain it was all Perrine’s mistake and said her guide Bor and all the coaching staff had to take some of the blame. He said the snow conditions and course set was much better than for the men’s Super-G on yesterday (Sunday) where 31 out of 70 competitors did not finish.

`I’m not sure she hesitated much,’’ Graham said.  “I just think there was a big surprise at how much speed they had. And that snow there is pretty horrible there. The more you put pressure (on ski) on there, the worse it feels.

“For a VI (vision-impaired skier) when it feels bad you don’t want to keep pressing on it.

“Unfortunately she didn’t press on it long enough. It may have only taken an extra split second to stand longer on it. Any one of those three gates down that pitch and she would have been Okay,’’ Graham said.

“Obviously a little more tactics was needed at that spot,’’ he added.

“So I think Andy and the coaches have to take a bit of responsibility for that. I’ll have to look at the video – I was watching Mel’s intent today – I wasn’t paying much attention to Andy. I’ve got to see if he accelerated down there and if he accelerated too much.

“She did her job like she does nearly every day. I’ve been happy with Mel all season. She can only do what’s in front of her.’’

But the bitter reality is that the Australian team felt Perrine would deliver them two medals – of any colour – in the Downhill (4th) and Super-G (DNF) at her second Paralympic Games. She was 5th (Downhill) and 7th (Super-G) in Vancouver and her recent World Cup form (two gold, three silvers, three bronze) had given rise to those hopes.

“Unfortunately they were trying to make amends for the other day and they just didn’t want to put the brake on there and you need to,’’ Graham said of Bor and Perrine’s tactics.

“She was disappointed the other day; she knew she’s been competitive all year; she showed she was miles ahead there (today).

“She just wanted to really put it down there and she did. I know Mel can ski great – she’d been skiing great all year and that’s what I said to her this morning `just do what you’ve been doing’.’’

Perrine still has three events to ski at Rosa Khutor – the Super Combined (Super-G & Slalom), the Slalom, and Giant Slalom.

“I really have to try and take some confidence into the next three events.’’