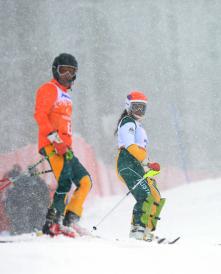 Paralympian Melissa Perrine and her guide Andy Bor took full responsibility for their mistake in adding a visor to her ski helmet on Tuesday to protect her eyes from the bright lights.

Perrine and Bor suffered the ultimate penalty of disqualification from the Super Combined event, after the first component of the race – the Slalom. The pair was in the silver medal position but will now not be able to compete in the Super-G on Friday to complete the Super Combined.

Perrine and Bor were back on the Rosa Khutor slopes today at the Sochi Winter Games competing in the stand-alone Slalom event for vision-impaired. But Perrine slipped over just a couple of gates from the top and did not complete the course.

Two other Australians are through to the second round of the Slalom today (Wed) – Vancouver bronze medallist Jess Gallagher (4th after first run in vision-impaired) and Tori Pendergast (7th in sit-skiing class).

After the completion of the second run, the two times are added together with the three fastest deciding the medals.

With Gallagher and Pendergast preparing to tackle the second run, Perrine was left to lament what might have been in her quest for slalom success.

“I hit a couple of bumps up there; ski got caught and I just went over the front. It happens – it’s slalom.’

But the fact she managed to put the horrendous Super Combined experience behind her spoke volumes for the 26-year-old’s courage.

“I was really, really disappointed,’’ Perrine said, speaking for the first time about the DQ, 24 hours earlier.

“A mistake was made – that was yesterday and not much I can do now, nothing I can do to change it. I’ll just keep focused. It’s a tough one but it is what it is.’’

Perrine and Bor had the makeshift visor taped to the front of her helmet, along the rim of the goggles. The outdoor halogen lights were switched on the Slalom course on Tuesday at 2pm, because the fog and rain had affected visibility so much.

But Perrine’s particular form of disability means intense, bright light distracts her vision away from her sighted guide Bor. The pair had used the visor at a World Cup event last month, when Perrine was looking into direct sunlight, and international race officials had not reacted.

But Bor said he and Perrine should have checked the International Paralympic Committee (IPC) equipment rules for alpine events at the Sochi Winter Games (March 7-17). The rules state any additions to a standard race helmet are illegal.

“It was just a stupid mistake,’’ Bor said, when asked why checks were not made.

But Perrine (NSW) was adamant that anyone thinking she had tried to give herself an unfair advantage over fellow competitors was totally misinformed.

“They’re not looking at this in the light it truly is. It wasn’t malicious intent at all,’’ Perrine said.

“It was a mistake; it was a completely innocent mistake. It was an oversight and that was it.

“We’ve paid the price for that and me and everyone on the team just wants to move on,’’ she said.

Perrine, who made her international debut for Australia in 2009 and skied at the 2010 Vancouver Paralympics, said the incident had not dented her love for her sport.

“Definitely not. I love this sport. I love racing; I love skiing; I love the mountain lifestyle,’’ she said. “I’m going to be around for a while to come yet.”

Asked how she had overcome the Super Combined disappointment to compete in Wednesday’s Slalom, she said: “The same way I try to do for every other race. I focused on what the event was and how I know to ski the event and what I had to do to perform.

“I pushed out of the start with all the best intentions.’’

Bor said Perrine had been in great form throughout the 2013-14 winter season.

“Like Mel said, she’s skiing well. A couple of things have gone against her here, but I’m really happy the way she’s skiing and conducting herself. She’s doing an awesome job,’’ he said.

Perrine was 4th in the Downhill last Saturday, but now has two DNFs (Super-G, Slalom) and a DQ.

“In terms of results, not great,’’ she said in assessing her Sochi experience. “But in terms of skiing performance and how I’m skiing, I’m happy with what I’m doing out there.

“I’m not skiing poorly. I’m skiing well – my times are good. I’m right in there but a few mistakes have cost me dearly,’’ Perrine said.

“I’ve always said I didn’t care whether I came first or sixth. It still doesn’t bother me. A result would be great – I’m not going to lie – it would be awesome to have a Paralympic medal.

“But it doesn’t matter in the end, as long as I’m skiing well out there, that’s important to me.’’