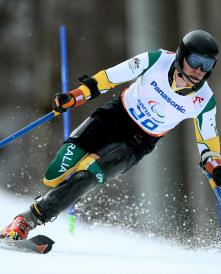 Three-time Paralympian Toby Kane showed why he is one of the top one-legged skiers in the world when he came tantalisingly close to a medal in men’s Slalom at the Sochi Games today.

It was the event Kane’s good friend and Australia’s flag bearer in Russia, Cameron Rahles-Rahbula took bronze in four years ago in Vancouver.

After his second run down the 54-gate course at the Rosa Khutor Alpine Centre, Kane shot to the top of the podium with just three skiers left from the 42-strong field.

Unfortunately the trio were among the best performers in Sochi so far. Russia’s Alexey Bugaev claimed gold while Vincent Gauthier-Manuel (France) took silver – giving both men their third medals of the Games. Alexander Alyabyev thrilled the Russian fans by taking the bronze medal to give the host nation two of the three podium spots.

Kane finished 4th, one shy of the medals, but was the only one-legged skier among the top four.

Competitors in the standing class comprise leg or arm amputees, or those with an impairment that affects one or two limbs. According to the severity of their disability, they are given a factored-time when they cross the finish line to try to even out the competition. The greater the disability, the larger the time factor.

“I’m happy with how I skied. There was a bit of a mistake in the second run but probably not enough to put me on the podium,’’ said Kane, who had finished the fourth fastest in the first Slalom run earlier today.

“I just got a bit wide at one point… and just lost some speed coming into the flat.

“I know the feeling of coming fourth quite well. I suppose there are good fourths and bad fourths. When the order is reversed after the first run it’s my job to be in first when I get to the bottom and I did that. I put down my run and that was what I was supposed to do – then you see what happens.’’

The two Russians on the podium sent the crowd at the finish line into a frenzy. It was an historic night anyway for the Games because it was the first night-racing ever conducted at a Winter Paralympics.

The course was lit up by floodlights to create a unique atmosphere for the athletes.

Australia’s other competitor in the Slalom, arm amputee Mitchell Gourley (Vic), went into the second run in eighth position but skied off-course, despite a more controlled run than his first.

“I was a lot happier than the first run in a bizarre sense,’’ Gourley said.

“I still feel I’ve put myself in a position to really attack the next two days and hopefully register a good result.’’

Gourley’s best event – the Giant Slalom – is raced on Saturday but he is still in contention in the Super Combined lying in 6th place with the Super-G section to come.

Australian alpine coach Steve Graham said Kane had done everything asked of him.

“He put himself there in the first run and put himself at the top of the podium ahead of the last three guys,” Graham said “But they’ve been the three best all year and showed why tonight.’’

The International Paralympic Committee (IPC) sets the factor for each competitor based on their results over World Cup, international and national series races and in conjunction with their physical impairment.

Gourley said Kane knew he had the three best skiers to follow him down but would have relished that challenge.

“It was upsetting to see Toby come fourth but he put it all out there, and there’s not a harder working athlete,’’ Gourley said.

“He probably needed one of them to go down but I don’t think Tobes would want to win a medal that way anyway. He did everything he could – it’s devastating for him but he’ll take confidence heading into his last two events.’’

Australia remains without a medal after six days of competition. But Graham said he and the team of eight athletes felt no added pressure.

“There’s pressure every single day so that hasn’t changed,’’ he said. “Every race bar yesterday (women’s Slalom) we were in with a good medal chance. We’re one or two away – just missing out.

“But that’s the nature of the Paralympics. The medal favourites for events many times don’t win.’’