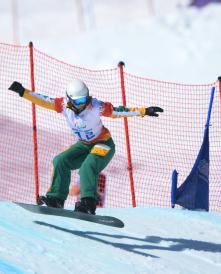 Australian snowboarder Joany Badenhorst was lying on the cold snow and in significant pain after dislocating her kneecap in a training accident just a couple of hours away from creating a piece of Paralympic history.

And the one thought that sprang immediately to mind was Pyeongchang, in South Korea – the hosts of the XIIth Winter Games beginning on March 9 2018.

The 19-year-old was one of three Australians – alongside Ben Tudhope (NSW) and Trent Milton (NSW) – who were in Sochi about to compete in the very first snowboard cross event held at a Winter Paralympics.

But the script has rarely gone to plan with the Australian alpine team here in Russia.

Badenhorst was completing her last training run on the Rosa Khutor course but crashed on a sweeping right turn, ending up with her board entangled in the netting, which lines the perimeter.

“I started thinking about Korea the moment this injury happened,’’ said Badenhorst, a left leg amputee from Griffith in southern NSW. She uses a prosthetic on her left leg to fit both feet into her snowboard.

“As soon as I realised something was very wrong with my leg, I knew that competing here was out for me because I knew it was serious enough to keep me out of the race.

“But I thought `You know what. There’s always Korea’. So I was talking about it a lot with my doctors. In a way I’d already started planning for Korea because Sochi was really a very sudden thing for me.

“So I’ve got my mind set on Korea already. I’m ready to go and I’ve got four years to get fitter and better and get on top of my game.’’

Badenhorst lost the lower part of her left leg in a tractor accident on her parents’ property when she was 10-years-old.

Although she is feeling deep regret at not being able to compete in Sochi, Badenhorst has always been a “glass half full’’ kind of person.

“I am so disappointed that I didn’t get to compete. But at the same time I feel blessed that my injury wasn’t any worse. It could have been really bad, much more serious with longer lasting effects on my snowboarding,’’ she said.

“But I’m so proud of all the girls who competed and wrote their own piece of Paralympic history.’’

While they were racing, Badenhorst was being transported by ambulance to Rosa Khutor Hospital.

“We have ordered more scans to determine the full extent of the damage. She’s had the knee taped and bandaged and is using crutches as she can’t put her prosthetic  back on yet,’’ he said.

“Given this is her prosthetic leg and she has a short stump below the knee, that knee is not inherently strong. It received some damage in the original injury, which caused the amputation.

“But I expect her to make a full recovery.’’

While still in the hospital and on pain-killers, Badenhorst asked the Australian medical staff with her to find out Tudhope (10th) and Milton (20th) results.

“I don’t think the day could have gone any better for him. I’m really happy for him.

“And for Trent he did a marvellous job. He’s worked hard for everything he’s got.’’

As for her own recuperation, Badenhorst expects to be in full health for the Australian winter season.

“I hope to be putting my full weight on my leg in a week but I’m expecting it will be two months before I’m fully recovered.’’