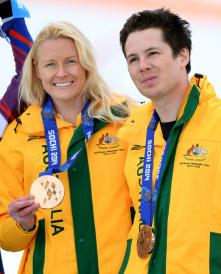 Jess Gallagher has landed back-to-back Paralympic Games bronze medals with her Giant Slalom triumph on the final day of competition in Sochi.

Gallagher is the first female skier to win a GS medal for Australia at the Paralympics.  She adds it to her Slalom bronze from the 2010 Games in Vancouver.

It was the second medal for Australia in Sochi – Toby Kane (Vic) took Bronze in Super Combined on Friday.

The last time an Australian won a Paralympic medal in GS was back in 2002 in Salt Lake when both Bart Bunting (vision impaired, silver) and Michael Milton (leg amputee, gold) were on the podium.

Ahead of Gallagher in the medals today were Slovakia’s Henrieta Farkasova (gold) and Aleksandra Frantceva (silver).

“It’s a nice course that allowed us to gain some speed and get into a rhythm,’’ Gallagher said, after celebrating her 28th birthday three days ago in the Athletes’ Village.

“It’s just nice to be out here again after feeling so ill on the Slalom day (Wednesday). After that race I was really upset, so for me today it was about coming out here and having fun.

Gallagher attributed part of her sustained success from Vancouver to Sochi with linking up six months ago with a new sighted guide, former able-bodied representative skier, Christian Geiger.

“We’ve put in a lot of hard work and Chri (Christian) came in quite late so to have him around has been so great. I’ve learnt so much from him because he’s such an amazing skier,’’ Gallagher said.

“I’m really pleased we could get the result after not producing the result we would have liked in Slalom.’’

Slalom was Gallagher’s preferred event and the one she has collected more World Cup podium finishes than any other event. But on Wednesday Gallagher slipped with just a few gates remaining on the second run.

“After the past week this Australian team has had, it’s easy to see how difficult this sport is. Just one tiny mistake and it’s all over. So it feels really great to put down two good runs and win that medal,’’ said.

Gallagher had a fall in Italy last month and has been suffering intermittent after-effects from mild concussion.

Geiger, 25, represented Australia at the 2008 able-bodied World Junior Alpine Championships and the senior World Championships in 2009. But in September that same year, Geiger was in a car accident and suffered internal organ damage to his spleen and liver and some brain trauma. Twelve months later, the long recuperation ended his competition able-bodied career.

But the Australian Paralympic Committee (APC) approached him to act as a sighted-guide for vision-impaired skiers.

“I’m so relieved,’’ Geiger said today after the GS second run. “I said to Jess `Who would have thought the medal would have come in GS.’ It’s been a long campaign and an interesting one, but so good to ski with Jess and the girls. They have improved so much as a group of athletes.

“It’s amazing what these guys can do from the visually impaired, to the standing and sit-skiers,’’ he said.

“It’s just brilliant. To be honest, Andy Bor (Mel Perrin’s guide) and I call ourselves `facilitators’ more than athletes. These guys are the athletes – we just do everything we can to help them get down the hill quickly.’’

Perhaps Australian alpine head coach Steve Graham needs an acknowledgment. He set the course for the second run in GS today,with its 47 gates and 44 turns.

The last time Graham set a course at a Winter Paralympics was in the Slalom four years ago in Vancouver, where Australia scored a bronze medal  for Cameron Rahles-Rahbula (Vic).

Gosford’s Tori Pendergast negotiated four clean runs down the challenging Rosa Khutor course (two in Slalom on Wednesday and two in Giant Slalom today) for a 100 per cent record in the sit-skiing class.

With the amount of crashes among the mono-ski classes over  the past week in Sochi, that’s quite an achievement.

“The contrast is  huge between Slalom and GS. There were a couple of intimidating bits on that hill,’’ Pendergast said. “With Slalom it’s a slower speed so the gates come at you a bit slower. But with GS it’s more intense and you’ve got to be really patient but at the same time you’ve got to get on those turns.

“It was definitely a bumpy ride down some parts there,’’ Pendergast said referring to the outline of rocks clearly visible underneath one section.

“They (course preparation workers) did the best they could with the snow they had. I’m happy to let the snow melt now after this.’’

The third Australian to compete today was vision-impaired skier Melissa Perrine (NSW). But again it wasn’t her day, when she fell and slid nearly 50 metres down the course on her first run.

That became her third DNF (did not finish) in Sochi after a 4th in the Downhill on the opening day of competition last Saturday. Perrine also received a DQ for wearing a non-approved visor in Super Combined.

It all amounted to an ordinary Games for the two-time Paralympian.

“They are not the best results I wanted, that’s for sure. I’ve had a lot of bad luck – a lot of things have gone against me. That’s the way things go sometimes,’’ Perrine said.

“I wouldn’t say they have been the Games from hell because I’ve skied well; skied fast so that’s always a good thing.

“Paralympic Games is a new level; a new experience. We only get one every four years. I’m used to performing on a World Cup level and showing up there when I’ve got to race to put one down the hill.

“Coming here I was prepared to do the same thing. I was in the right head space. Downhill went well – I only just missed out there – then one second hesitation in the Super-G and things just kept going badly from there.

“What just happened up there on the hill (in GS) was equipment doing what it was designed to do. I hit a bump at just the right angle, the ski popped off, and I went down.’’

Guide Andy Bor said the pair had learnt to cope with a lot of disappointment in Sochi.

“Ski racing.… there’s some high highs and some low lows,’’ he said. “Today Mel has come out and done her best as she has for every single run.

“We came down that pitch and Mel is completely blind staring into the sun. She doesn’t see a hole and her ski comes off.