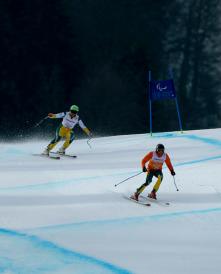 TWO top-eight finishes and one top-five in Downhill by Australian Paralympians Toby Kane (VIC), Mitchell Gourley (VIC) and Melissa Perrine (NSW) give hope that even better results are heading their way for the rest of the Sochi Winter Games campaign.

But first there is the disappointment of World Cup winner Perrine falling agonisingly short – by 0.37 seconds – of a medal in the women’s vision-impaired class on Saturday.

Downhill was the first of five Alpine skiing events to be raced on the Rosa Khutor course over the next nine days.

It bettered Perrine’s 5th placing in the Downhill at the Vancouver Games four years ago, but was not the type of performance she and Bor were hoping for after a first placing in Downhill at the Panorama, Canada, World Cup in January and other podium results in speed events.

“I was nervous but I was also composed and ready. I knew what I had to do and I executed – for the most part – exactly what I wanted to,’’ the 26-year-old said.

Australia’s head alpine coach Steve Graham said the whole team felt Perrine’s disappointment. But he hoped she would show more aggression in the Super-G – the next event on the Sochi alpine program on Sunday.

“The Russians haven’t beaten them all year so that was frustrating for Mel and Andrew,’’ Graham said. “They just skied the hill; they didn’t race the hill. The other girls stepped it up and raced the hill.

“Mel tried hard but unfortunately wasn’t good enough today, so it was disappointing.’’

Graham said the results should inspire and motivate her and Bor to show their capabilities in Super-G.

“It should do that. They’ve let a golden medal opportunity slip through their fingers today.’’

It was a different scenario for men’s standing class Downhillers, Kane (6th) and Gourley (7th).

Kane was drawn to race first down the mountain out of the 17 competitors in his class. He held the gold medal position – and Gourley the silver – until Austria’s Markus Salcher, Russia’s Alexey Bugaev and France’s Vincent Gauthier-Manuel completed the course to finish with the gold, silver and bronze.

The former able-bodied Austrian World Cup podium finisher Mattias Lanzinger, who had to have his lower left leg amputated six years ago in a skiing accident, was 4th and joint silver medallist in Vancouver with Australia’s Marty Mayberry, Switzerland’s Michael Bruegger, was 5th.

“I thought I went out and executed exactly what I wanted to do and that’s what’s important going forward,’’ Kane said. “I was a bit shocked when I found out yesterday but I’m proud of how I handled myself because it’s a big occasion.’’

Gourley was the third skier out of the gates and attacked the course with real attitude. He and Kane set the fastest times over the first six racers.

“We both got to hang out in the leaders’ box for awhile, which is always a bit of fun,’’ Gourley said.

“Personally I’m really happy with my run. The intent was there that was missing, and why I was frustrated, during training.

“I feel more confident going into the rest of the week,’’ Gourley added. “I came into Sochi as one of the favourites in GS (giant slalom) and that is my favourite. I’ve always been strongest in slalom but I have done a lot of work on my speed this year.

“I didn’t ski the Downhill in Vancouver and today was equal to my best-ever World Cup performance for the event. So I can’t complain.’’

Graham said Kane, a bronze medallist in Super-G in Torino in 2006, and Gourley, a World Cup winner in Giant Slalom at Sestriere, Italy, last season, were right to feel proud of their performances.

Both men were also close to team-mate Cameron Rahles-Rahbula, who crashed in Downhill training in Sochi and chipped part of his shin bone and bruised his right ankle. The accident has ruled him out of the three speed events at the Paralympics so far. His prospects for the technical events later this week will depend on further medical examination.

Kane has been with Rahles-Rahbula for three Paralympic Games. Both men are also leg amputees and share that innate knowledge of skiing on one leg.

“Toby was excellent,’’ Graham said. “Remember he fell in the first training run here and then what happened to Cameron on top of that, but he went for it,’’ he added.

“We changed skis for him. He went from a very long ski to a shorter ski. So given that he didn’t get another training run in yesterday (Friday’s practice cancelled) you couldn’t ask for more.

“He wasn’t’ that far out of a medal, and those guys had two training runs and he only had one. It shows the skills that he’s got,’’ Graham said.

“So I was really  proud of him. He knew it was all or nothing today and he put it together.’’

Graham also praised Gourley for overcoming a few demons since his crash on this course in 2013.

“Mitch skied very well. But unfortunately being small in Downhill it just doesn’t help,’’ Graham said. “But both he and Toby raced well so that looks good for them in Super-G next up.’’

Australia doesn’t have a true speed hill of the quality and length of those in Europe, Canada or the USA. But the sunburnt country has produced three top-10 Downhillers at a Paralympic Games in Sochi.

“It’s good training;  it’s spending a lot of time overseas; and it’s belief in the whole process,’’ Kane said, when asked to explain how that happened.

“You might not ski fast for a period while you’re doing technical work in slalom and GS. But for me it’s a belief in the whole process that the gym training, the snow training, the experience of years of skiing allows me to come out there and believe I can be fast.’’

Three athletes did not finish the challenging Sochi course in Kane and Gourley’s standing class today.

Nine athletes in the sitting class – where skiers sit in a bucket-like seat on a mono ski with outriggers – crashed. One was airlifted to hospital, to further highlight the dangers of the Downhill.