Aussies back on track in Sochi 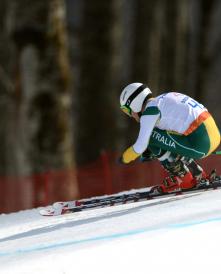 But the trio’s thoughts were never far from Rahles-Rahbula, who is undergoing treatment on a fractured shin bone, a swollen ankle and some facial bruising after a high-speed fall during Wednesday’s Downhill practice.

“The run was good,’’ Kane said. “But I didn’t have the best feeling at the start – with what’s happened over the last couple of days, with Cam getting injured and then one of the American athletes (Andrew Kurka, USA) getting seriously injured, it just makes it that bit harder to stand up the top and want to throw yourself into it.

“And with me yesterday (fall on course) I wanted to at least experience the whole course,’’ Kane said.

“So happy to be down here in the finish. I still have a bit of work to do tomorrow.’’

“The snow was a little better today but I didn’t probably make the most of it and didn’t improve as much as I would have liked. So that’s a bit of a bummer,’’ the 22-year-old he said.

“There were some good things up there so I’m looking forward to another run tomorrow and then put it all together on race day. But still some lingering problems to iron out.

“I hope we get another freeze like we did last night so it (Snow) will hold up better.’’

Like Kane, Gourley said he had Rahles-Rahbula in his thoughts.

“Yesterday was tough because I started after the two boys (Rahles-Rahbula and Kane) both had gone down. There’s reasonable hold-ups on the course so you know something is up, which is not great,’’ Gourley said.

“Personally I had a pretty massive crash here (Rosa Khutor) last year. So I was working through my own stuff on that and figuring out how to get past that and be able to attack that section of the course.’’

Gourley, an arm amputee, finished 7th fastest and Kane, a leg amputee,  was 8th fastest after the second Downhill course practice today behind leader Markus Salcher (Austria). A third and final run will be held before the three gold medals in the Men’s Downhill (standing, sitting and vision-impaired classes) are raced on Saturday.

The same three classes of gold medals will be decided in the Women’s Downhill on Saturday, with their course 2,713 metres in length with a drop of 790m.

“We’re working on a few different things than we did yesterday,’’ Perrine said. “Some of the bits we worked on ran better so we’re happy with that.

“There’s a couple of different sections of the course that I can attack a lot harder. That’s the goal tomorrow – piece together the good parts from both runs and put it into one solid run.’’

The 26-year-old, who collected a gold in the World Cup downhill race in Panorama, Canada, in January, is at her second Paralympics after competing in Vancouver in 2010.

“So far so good with my preparation,’’ she said. “I remember Vancouver quite clearly,’’ she added recalling a bad fall she sustained in a World Cup race in the lead-up to the Games.

“I’m quite happy with where I am right now. I feel good on my skis, I’m healthy, I feel fit. So I’m in the best possible place I can be heading into these Games.’’