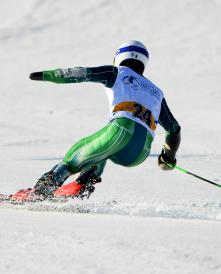 World number one vision-impaired slalom racer Jessica Gallagher was unable to finish the first run, having rejoined her guide Christian Geiger after a brief break while Geiger returned to Australia.

Australia’s remaining female Victoria Pendergast was unable to finish the second run, while men’s standing competitor Mitchell Gourley was knocked out in the first run after falling seven gates into the run.

According to Australian Paralympic Winter Head Coach, Steve Graham, Australia’s Toby Kane was skiing at his best in the first run, before crashing just five gates from the bottom in his second.

Of the 66 male and female competitors across all classes in today’s race, only 40 were able to complete the course and record a result.

“Weather was perfect today but most athletes struggled to capitalise on it due to the past three days of poor visibility and snow conditions on a challenging hill,” said Graham.

“Overall though, after a really successful season so far, it has made everyone realise there is more work to do over the next three weeks before we get to Sochi if we want to achieve the performance goals we’ve set.”

The Australian squad will now travel to Abtenau, Austria for training before competing in the World Cup finals in Tarvisio, Italy at the end of this month.