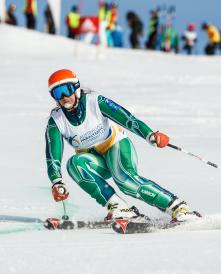 Australian Paralympic alpine skier Melissa Perrine has finished her successful campaign at the IPC Alpine Skiing World Cup in Panorama, Canada with a silver medal, adding to her gold and bronze from earlier in the competition.

Perrine, who is vision impaired and skis with her sighted guide Andrew Bor, finished one second behind Great Britain’s Kelly Gallagher, and one second in front of Russia’s Alexandra Frantseva to secure the silver and complete her first medal set at an IPC World Cup level.

Over the weekend’s downhill racing, Perrine became the first Australian woman to win a gold medal at an IPC World Cup and followed it up with a bronze medal in yesterday’s giant slalom.

Australian Winter Head Coach, Steve Graham says the pair did well to recover from a fall and a near fall during the previous two days racing and not let it affect their push for a super G medal.

“After the previous day’s hiccups, they skied a more conservative race which helped them finish safely but may have cost them the gold,” said Graham.

“Overall it was a successful week with them winning the full set of medals and knowing that they have more in them.”

In the men’s racing, Australia’s Mitchell Gourley came close to finally winning the medals that have eluded him during this World Cup competition. The 22-year-old finished fourth, while teammate Toby Kane finished in eighth position.

“Both Mitch and Toby are looking forward to some hard snow as the conditions here certainly didn’t allow them to show their best,” said Graham.

“Both are happy with their skiing though and where we’re heading to next in Copper Mountain has had over a metre of snow in the past week.”

Perrine, Gourley and Kane will be joined by Jessica Gallagher and her sighted guide Christian Geiger, and sit-skier Tori Pendergast at the next IPC Alpine Skiing World Cup at Copper Mountain, USA due to begin on Friday.