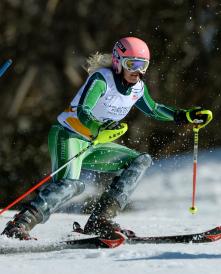 Gallagher and her sighted guide Christian Geiger won gold in the giant slalom with a commanding 6.28 second lead over silver medal winner and teammate Melissa Perrine and her guide Andrew Bor. Great Britain’s Jade Etherington finished 8.84 seconds behind for bronze.

It was the second gold medal of the season for Gallagher, after winning her first the day before in the slalom. The 27-year-old vision-impaired athlete joined forces with her new guide Christian Geiger at the Australian-hosted IPC World Cup in Thredbo last September, where they won a silver and bronze medal. The pair have since gone from strength to strength thanks to a heavy training period in the USA.

Perrine, 25, has also ramped up her push for a medal at the Sochi Paralympics in March, having won two gold, two silver and one bronze World Cup medals since the start of 2014. Having finished in fourth position after the first run of the giant slalom, Perrine and Bor were able to improve their time by 5.26 seconds to nab the silver medal.

Sit-skier and Sochi Paralympic hopeful Victoria Pendergast finished outside the medals in her event, almost 19 seconds off the pace of winner Momoka Muraoka of Japan, while in the men’s standing Mitchell Gourley was Australia’s only finisher, in sixth position. Teammate Toby Kane did not finish the first run.

Australian Winter Paralympic Heach Coach Steve Graham believes today’s gold and silver medals are a perfect way to finish the North American campaign before the squad heads to Europe for the European leg of the IPC World Cup series.

“The squad has been away from home since November and these results are a reward for all the work everyone has put in here in Colorado,” said Graham.

“Everyone is now looking forward to some time off and some more training before the next World Cup in St Moritz in early February.”

Australia finishes the North American leg with three gold, three silver and one bronze medals in the alpine skiing events, as well as Matt Robinson’s gold and silver medal in the snowboard cross event.