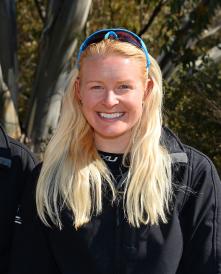 It was Australia’s vision-impaired women who led from the front, with Melissa Perrine and her sighted guide Andrew Bor winning a second gold medal for the season, and Jessica Gallagher and her new guide Christian Geiger winning their first gold medal as a pair.

Perrine, who collected a gold, silver and bronze medal at last week’s World Cup event in Canada, won gold in the giant slalom, 1.65 seconds in front of team mate Gallagher who nabbed the silver medal ahead of Great Britain’s Kelly Gallagher.

Meanwhile, Jessica Gallagher and guide Christian Geiger had their first World Cup win, skiing to gold in the slalom. Gallagher, who won a bronze in the slalom at the Vancouver Paralympic Winter Games, joined with Geiger in September 2013 and has been training in the USA since November.

In the men’s competition, Toby Kane came close to a medal in the standing slalom, finishing 3.83 seconds behind winner Alexey Bugaev of Russia, while teammate Mitchell Gourley finished not far behind in sixth place.

Kane again did well to finish fourth in today’s second slalom race, with Gourley unable to finish the second run of the day.

With Para-snowboard cross the newest event to the Paralympic program, Australia showed promising signs with Matt Robinson defeating America’s Mark Dervais to win gold. Although not eligible to compete at the Sochi Paralympic Games, Robinson won Australia’s first Para-snowboard gold medal, and followed it up with a silver in today’s competition.

Racing continues tomorrow, which will mark 45 days to go until the Sochi Paralympic Winter Games.