Freney is Young Australian of the Year 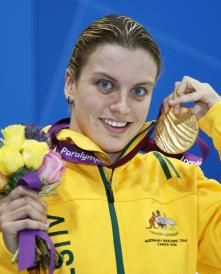 The Australian Paralympic movement is celebrating the announcement of Paralympian Jacqueline Freney as the 2014 Young Australian of the Year.

Australian Paralympic Committee President Glenn Tasker said Freney was highly deserving of such an honour for her achievements both in and out of the swimming pool.

Since winning eight gold medals at the London 2012 Paralympic Games, Freney has worked tirelessly as a motivational speaker to raise disability awareness and to promote the value of sport for people living with a disability.

“On behalf of the Australian Paralympic Committee, I congratulate Jacqueline on this very prestigious award,” Mr Tasker said.

“Jacqueline was the most successful athlete from any nation at the London 2012 Paralympic Games, and she has continued to inspire us with her pursuit for ongoing excellence.

“Not only is she an outstanding ambassador for the Paralympic movement, Jacqueline is a highly driven, passionate, disciplined, engaging young woman who has overcome a number of obstacles to become the world’s best.

“These are the qualities that make her an outstanding choice for Young Australian of the Year, a role she will flourish in and fulfil to the highest standard.”

Prime Minister Tony Abbott made the announcement at a ceremony in Canberra, before Freney accepted the award and addressed the thousands of people in attendance and many more watching the live telecast.

“This is a significant day not only for me but also for the Paralympic movement as it reflects the unique role Paralympians play in society,” Freney said.

“Please understand that I’m just a country girl who was born with extra life challenges. I’m an example of how a child with special needs can develop and achieve with support, guidance, encouragement and opportunity.

“I ask that all Australians respect each other’s diversity and acknowledge their ability to contribute to this great country.”