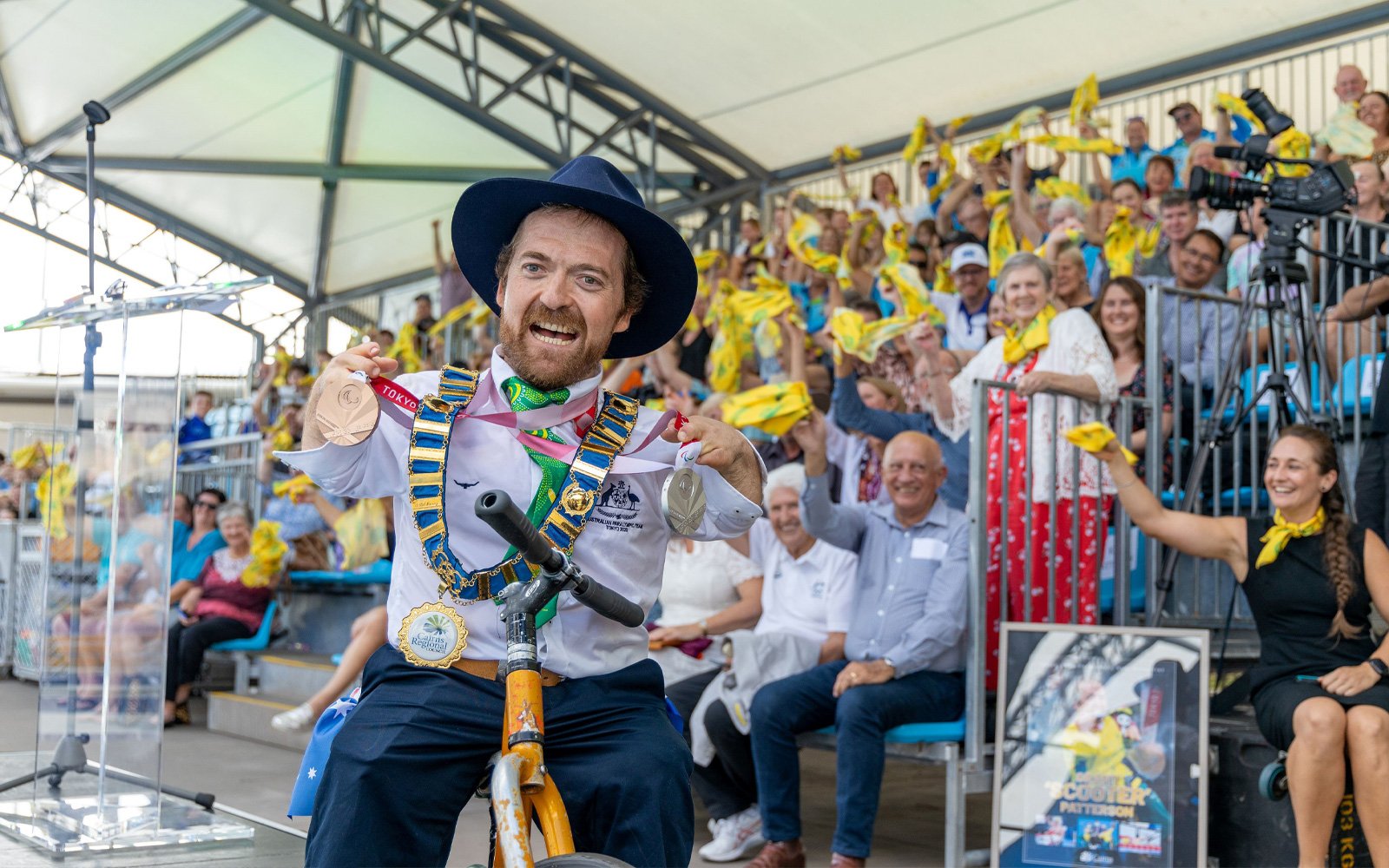 One of the Australian Paralympic Team’s stars from Tokyo 2020, Para-swimmer Grant ‘Scooter’ Patterson, is back in the swing of normal life after celebrating his Games heroics with swimming great Dawn Fraser, who travelled to Cairns for a special presentation on October 1.

About 150 people came to see Patterson receive the keys to his beloved hometown of Cairns from Mayor Bob Manning at Tobruk Memorial Pool, including Patterson’s grandparents who made the trip up from Brisbane for the event.

“That reception was pretty special, I must say. Being in Cairns my whole life I’ve never received anything like that,” said Patterson, who is known as Scooter because of the tricycle he rides to aid his mobility.

He joked that the keys to the city don’t actually do anything, but it was more so the reception that he really loved.

“[Fellow Para-swimmer and close friend] Ahmed [Kelly] and Kurt Fearnley sent messages, Dayne Zorko the captain of my team the Brisbane Lions sent a message which was pretty cool,” he said.

“I even had my learn-to-swim teacher come up, which was really special. He taught me to swim when I was three or four.

“It’s a very humbling thing to accept when someone flies a long way to come and celebrate with you when you haven’t been in contact for a while.”

Among those who came to share Patterson’s success in winning a silver medal in the 50 metres breaststroke and bronze in the 150 metre medley – his first Paralympic medals since taking up competitive swimming in 2009 – was Fraser, who Patterson described as his mate.

“Dawn talked about me being an inspiration and doing the right things, how I talk and all that,” he said. “She just supports everything I do. But mainly we just talk general chit-chat. I’m a bit of a larrikin like herself and I really appreciate what she did.

“She came to the bar afterwards and we had a chinwag. She’s great. I think she came up because she wants to support people coming through the ranks. My grandparents were over the moon. She’s a living legend from back in their time.”
Patterson has returned to work and training and looks back on the Tokyo campaign as a breakthrough in his sporting career.

“I worked very hard for it and it was a great pressure lifted off my shoulders,” he said. “To spend 13 years working towards something and then finally receive it, to win a couple of medals at the Paralympics, it takes a very long time.”

The keys to the city were not on Patterson’s wish list, but the 32-year-old was deeply appreciative.

“They’re hanging up on the wall, but a bit of the plaque fell off yesterday,” he said with his usual humour.

“I was doing some washing and heard a ‘ching’ and thought ‘What’s that?’ A bit fell off and I had to glue it back on. But it’s a great thing. I’m really thankful.”