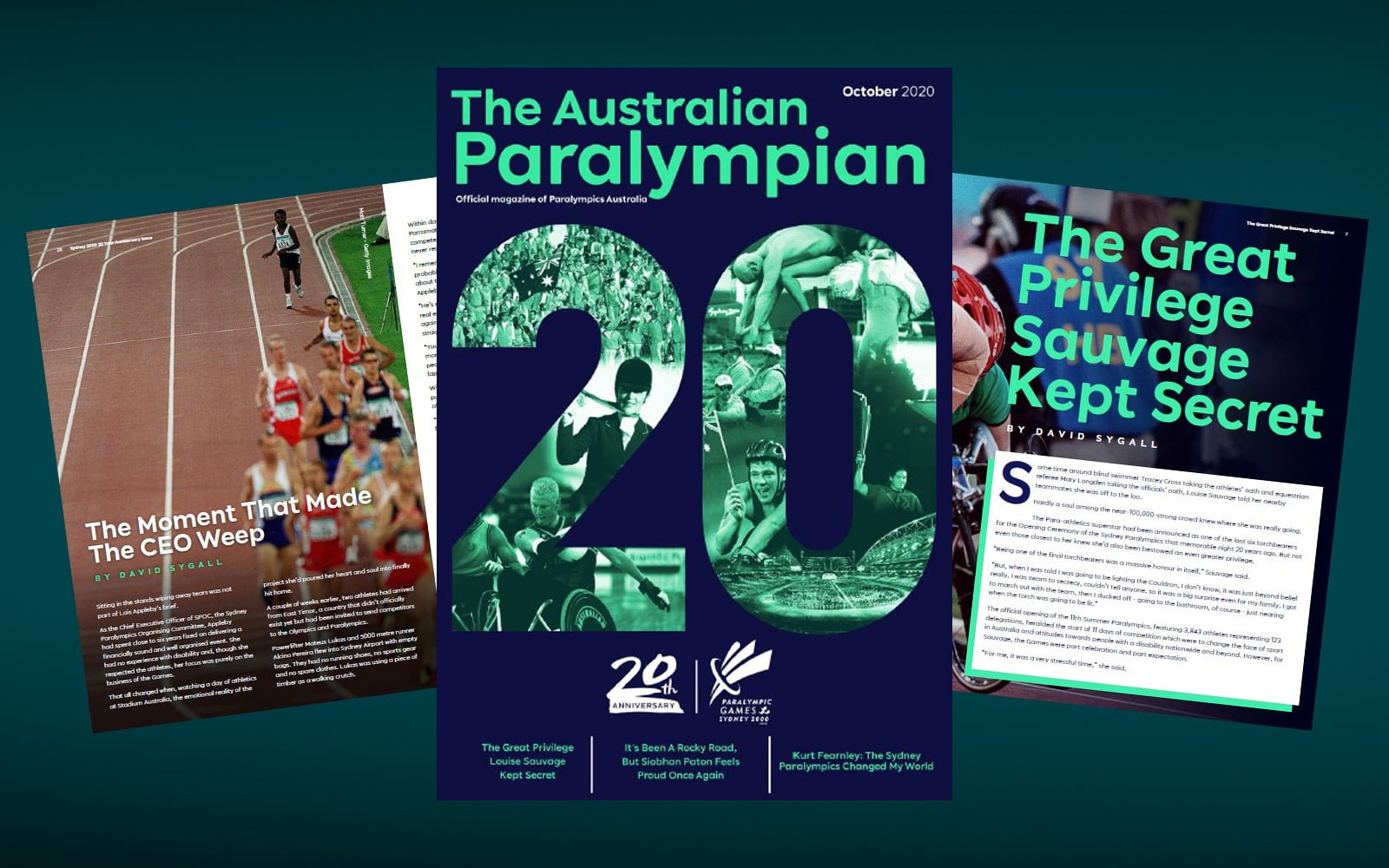 Paralympics Australia President Jock O’Callaghan has officially opened a fortnight of celebrations marking 20 years since the landmark Sydney Games in 2000.

Regarded worldwide as the start of a grand and more professional era for Paralympic sport, the size and scale of Sydney 2000 shattered records and saw multiple Paralympians become household names.

Leading the anniversary line up is a special edition of The Australian Paralympian magazine featuring interviews with some of our top Para-athletes who competed at the Games and the key administrators and officials who made the event happen.

Complementing the magazine will be a colourful and emotive digital campaign, capturing ceremonies, celebrations, daily highlights and medal-winning moments.

“In nearly every conversation I have with people about Paralympic sport, whenever the subject of the Sydney Games comes up, it’s almost inevitably met with knowing smiles and deep respect. That’s the effect those Games still have 20 years on,” O’Callaghan said.

“Not only did our magnificent Australian Paralympic Team top the medal tally, they captured the attention and admiration of the whole country, inspired a generation and helped change perceptions about people with an impairment nationwide and beyond.

“From an organisational viewpoint, the Sydney Paralympics was staged innovatively and brilliantly. It set new standards in areas such as ticketing, sponsorship, media and transport.

“Sydney 2000 really was a watershed for the Paralympic Movement and, more generally, for sport in Australia. I extend my gratitude to everyone who played a part, including the volunteers who gave so much, the supporters who filled the stadiums, and of course the incredible Paralympians from Australia and around the world who competed so superbly.”

20 years on, the Paralympic flame continues to burn brightly. Donate now and support the next generation of stars.

Among the remarkable stories captured in the special edition of The Australian Paralympian magazine is the tale of a young and wide-eyed Kurt Fearnley at his first Games, the novel way Louise Sauvage kept her lighting the Cauldron a secret, and the emotional journey of swimmer Siobhan Paton, who won an extraordinary six gold medals.

“The Australian Paralympian goes above and beyond this edition,” O’Callaghan said.

“It’s more than a magazine, it’s a souvenir, a keepsake, if you like, and provides some fascinating new perspectives on the greatest Paralympic Games yet.”

O’Callaghan said Paralympics Australia wanted to bring as many Australians as possible on the commemorative journey. Members of the public are encouraged to share their standout moments and memories on social media using the hashtag #MySydney2000 and tagging @AusParalympics on Facebook, Instagram, Twitter and LinkedIn.

The Sydney 2000 Paralympic Games were held from 18 – 29 October. More than 3,380 athletes from 121 countries competed in 18 sports, with Australia finishing on top of the medal tally.