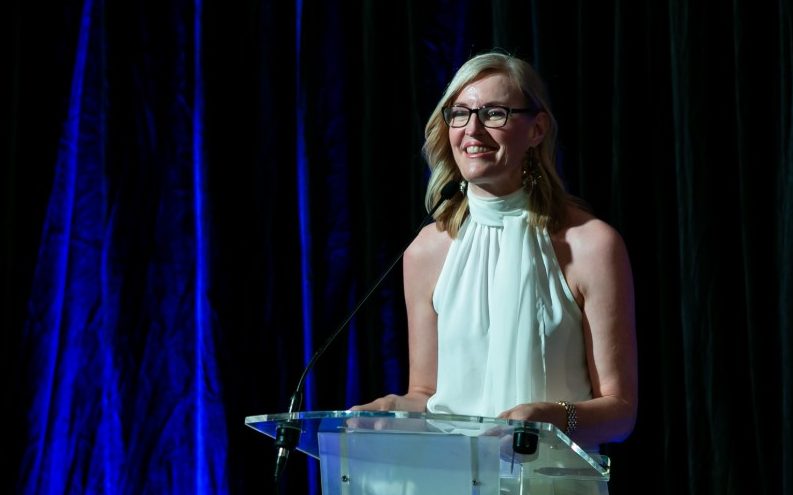 The honour was presented to Tighe at a gala ceremony in Sydney, NSW, attended by the best in Australian sports media, as well as her family who she paid tribute to.

The Lifetime Achievement Award is awarded to an individual who has made a lengthy, significant and influential contribution to the reporting of Australian sport.

Tighe has had a career spanning more than 30 years and covering a breadth of major sporting events including the Paralympic, Olympic and Commonwealth Games, and 16 years of hosting the Hopman Cup. In 1997, she became an anchor for ABC Grandstand, where she remains a staple of weekend sport.

In her speech, Tighe focussed her attention on the highlight of her career – her coverage of Paralympic sport including six Paralympic Games.

“I felt a connection with the Paralympic movement from the very first Games I attended in Barcelona 1992, where I was introduced to two athletes in particular who would go on to become synonymous with the Paralympics and transcend their sports – wheelchair racer Louise Sauvage and swimmer Priya Cooper, both multiple gold medallists,” Tighe said.

“To help tell their stories and share their events and those of many others – to focus on ability rather than disability – and the role sport can play – the Paralympic movement was showing what was possible.

“That the Paralympics is now part of our commercial colleagues’ sporting menu and that athletes like Kurt Fearnley and Dylan Alcott have also transcended their sports speaks volumes for what the Paralympic movement has become and I hope will grow further.”

Paralympics Australia’s Chief Executive, Lynne Anderson, applauded Tighe’s outstanding body of work and said it was humbling that Tighe credited the Paralympic movement and its athletes for helping her career reach such great heights.

“The Sport Australia Lifetime Achievement Award is an incredible honour for any sport journalist in Australia, but this one is particularly fitting for Karen, who has contributed so much to the growing public recognition and admiration of Paralympic sport over nearly three decades,” Anderson said.

“As the Paralympic movement grows, we are seeing more and more journalists get hooked on our sport, just as Karen did many moons ago. We are delighted that Karen’s passion, drive and particularly her outstanding skills as a journalist have been recognised because she really has helped carve the unique place that Paralympic sport now enjoys in Australia, which is something we are hugely grateful to her for.

“On behalf of Paralympics Australia, I’d like to congratulate Karen once again on her achievements. It is thanks to journalists with the skills and the devotion like hers that have ensured that the Australian Paralympic Team continues to grow into one of the most loved sporting teams in our country.”

By Sascha Ryner, Paralympics Australia
Posted: 14/02/2020
Photo with thanks to Sport Australia