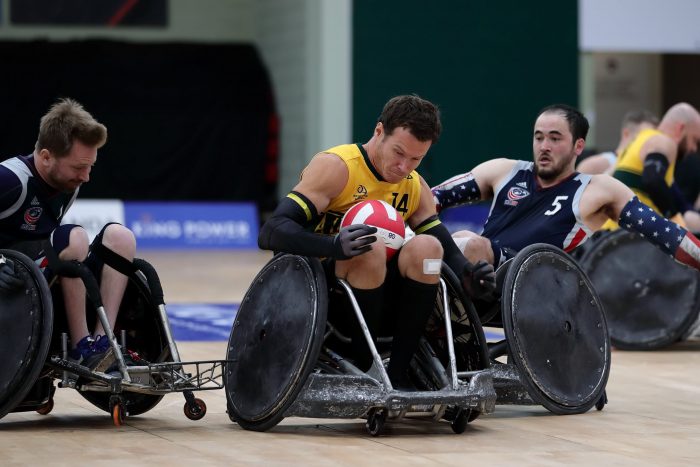 The United States move straight into the gold medal match as top qualifier at the three-team tournament, leaving Australia to renew hostilities with the host nation after their thrilling overtime battle overnight. The Australians prevailed 58-57.

The victory was the Steelers’ first and only during their four qualifying matches after two defeats on day one and a 57-51 loss to the United States earlier on day two.

But their 1-3 record from the rounds is now meaningless. The Australians have reset, knowing all three teams face a do-or-die scenario.

“I was really impressed with the effort we showed in both games today,” Australian head coach Brad Dubberley said.

“It was a massive improvement from the first day. We knew we were going to be a bit rusty, in terms of game fitness, when we got over here so we spoke at length after the first day, about making a better effort which we did.

“There is obviously some stuff to improve on for the semi, but we got everyone in the game today, we played our different line-ups and hopefully we continue to build on the progress we’ve made as the tournament has gone on.”

Testing the depth of multiple line-ups has been a key focus for Dubberley in Leicester. He said Jayden Warn, Chris Bond, Jake Howe and Jason Lees have shone brightest with the increased responsibility in a positive sign ahead of their Paralympic Games campaign in Tokyo this August.

Australia’s most experienced and powerful line-up, consisting of Mick Ozanne, Ben Fawcett, Bond and captain Ryley Batt has not featured at all at this tournament so far.

“We won’t change too much for the semi-final,” Dubberley said.

“Against GB today, I was pretty happy with the way we tracked and the better effort we showed. I was really impressed to get the win there and win by one in overtime. A couple of times we were up by a couple goals, but we did enough to get the win in the end.

“Defensively, we nullified their stronger players really well and if we concentrate on doing that again in the semi, that will give ourselves a good chance of playing the US in the final.”

The Steelers face Great Britiain in the semi-final tonight at 10pm (AEDST) before the winner progresses to the gold medal match against the United States at 2am.

Matches are streamed live via the official website: https://www.wrquadnations.com/