Six in a row for Dylan Alcott at Melbourne Park 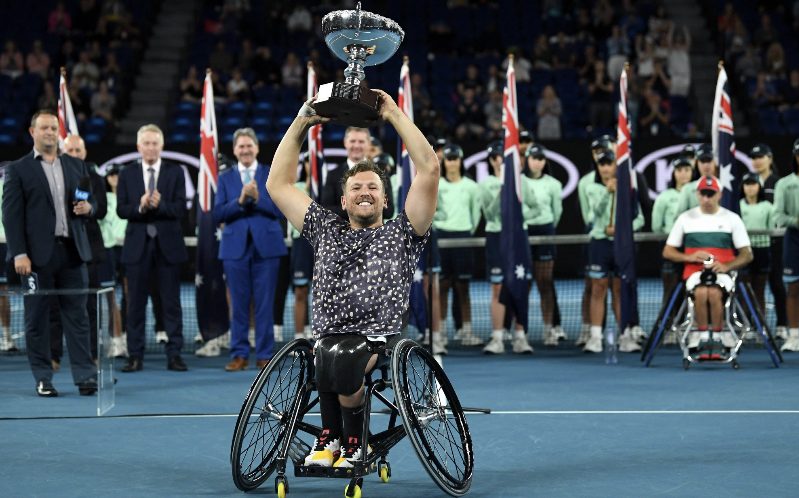 Dylan Alcott has proven to be unbeatable at Melbourne Park in 2020, winning his sixth consecutive Australian Open singles title.

Alcott took down the world number 2 Andy Lapthorne in straight sets 6-0, 6-4, and sent his competitor a clear warning that his Paralympic gold would not be up for the taking in August this year.

In front of a roaring 8,000-strong crowd in Rod Laver Arena, Alcott said he played his “best ever tennis” to claim the win.

“This feels awesome. I’m really proud of how I played, and in fact it’s the best final I’ve ever played,” said the 29-year-old.

The victory was also extra sweet for Alcott, after suffering a defeat from his British Rival at the US Open, while trying to win a calendar Grand Slam in New York last year.

“This is particularly awesome. I really stuffed up the US Open and I was pretty devastated, and I hated tennis for a bit. I’ve worked hard on myself since then, including getting a mindset coach, and I think it’s paying off,” he said.

“You don’t tend to place much attention to your mindset when you’re winning all the time, and when I needed it in the US, it wasn’t there because I hadn’t practiced it. It was a real wake up call and I’m really trying to embrace all of that.

“And that first set, that’s how I play with my coach Francois (Vogelsberger) on court 26 when no one is watching. Because I was in the moment. That was the most like my training and that’s the hardest thing to do, and I’m really proud of what I did out there.”

Alcott was too good from the start of the match. He refused to give up a game in the first set, and while his opponent did his best to rattle him, Alcott’s prevailed thanks to his strategic style of play.

The reigning Paralympic champion took control, winning the most service points (23 vs. Lapthorne’s 21) and played the most return points (36 vs. 32). He  won 66 points in total – 15 more than Lapthorne, and it was no doubt his five volley shots that secured his win in the second set.

While Alcott won’t deny that he has five major goals in mind for his tennis this year, including backing up his Paralympic gold in Tokyo, his focus will remain on being the best version of himself.

“Last year, winning all four grand slams was on my mind every five seconds, but now it’s not. It’s enjoying what I’m doing, having a great life, loving going to the Paralympics and playing the Grand Slams, and that’s how I’ll produce my best tennis,” he said.

“I’d be lying if I said I didn’t want it, but I can’t demand that of myself.  I used to have an expectation to win. I have a goal to win, and now my expectation is to be the best version of Dylan.”

Alcott will now turn his attention to his preparation for the French Open in June, as he builds up towards Tokyo 2020 just months later.

“When you put away the mega bucks that a Grand Slam can provide, what’s the best thing in sport? I think it’s Olympic and Paralympic gold medals, so I’m pumped for it, I really am.

“And we also have the Grand Slams. I can’t believe I’m saying this, but I’m not going to go out and have 100 beers tonight, like I normally do when I win a Grand Slam. And that’s because, it’s a Paralympic year,” he said.