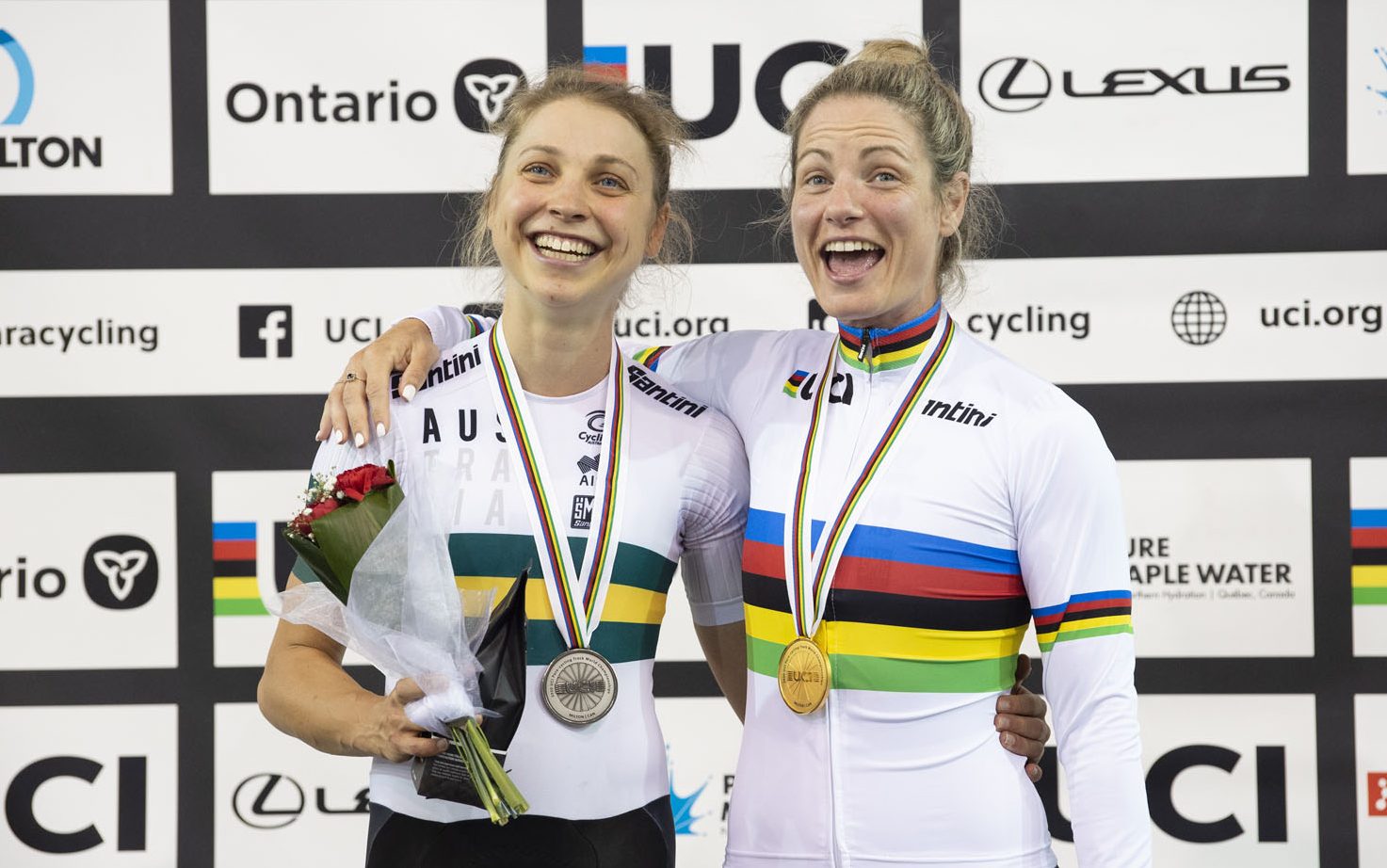 The Australian team’s eight athletes won eight gold, one silver and one bronze, with powerhouse China the only nation to win more gold with nine. Only China (21), Great Britain (14) and the USA (12) won more total medals.

Petricola took gold in her pet event, the individual pursuit, before storming to scratch race gold only two hours later, which secured victory in the omnium.

“Today was a pretty unbelievable day. I still can’t believe that it has worked out like this,” said Petricola, who was diagnosed with multiple sclerosis 12 years ago at the age of 27.

Petricola opened her World Championships campaign by finishing just two tenths of a second off the 500m time trial podium in fourth, before taking second in the 200m time trial – not a world title event.

She then defended her 3000m individual pursuit world title by catching teammate Meg Lemon inside the final two laps of their final clash. Despite having to negotiate her way around Lemon, Petricola still powered to a scorching time of 3:44.146, just three seconds outside of her – still to be ratified – world record set at the UCI Track Cycling World Cup in Brisbane, QLD, last December.

“I really wanted to defend my title from last year in the IP [individual pursuit], and was so excited that it was an all-Australian gold medal ride with Meg in the ride-off. It was a win-win for the team, regardless of the result.”

With less than two hours to recover, Petricola went on to win scratch race gold. The dual wins, combined with the fourth and second, secured her victory in the four-event omnium.

“I had mentioned to my coach, Cam, a few weeks ago that I wanted to win the scratch race, and I think he thought I was joking,” she said. “I got a few tips from Sam [Welsford] before I left Adelaide about how best to back up the IP into the scratch race, and was lucky enough I could implement his strategy and get away with the win, which in turn sealed the omnium.”

“I feel so grateful to be a part of such a great, strong team. We are so lucky to work with such amazing staff and coaches who support every part of our preparation. There is no way I could do this without any single one of them – our team’s strength is a reflection of the hard work and dedication of not just the athletes, but every person associated with our team.”

Greco staged a sensational comeback inside the final few hundred metres of her women’s 3000m C3 final to defend her world title, powering home over the final two laps to win by more than four seconds. Her time of 4:00.243 was just two-tenths of a second outside her own world record, set one year ago at the 2019 World Championships in Apeldoorn, the Netherlands.

“I was happy with the overall result of the day,” said Greco. “I worried myself a little in the final when I was down a few seconds, but thankfully had it in my legs to bring it home in the last two laps. I’m very happy I was able to defend my title in the individual pursuit.”

In the 3000m final, Jaco Van Gass (RSA) rocketed to a lead of one second after the first two of 12 laps, before extending his lead to nearly two seconds at the halfway mark. But in a fitting finale to end the opening day’s schedule, Nicholas grabbed the lead on the final lap and showed his class by racing to the gold by half a second (3:28.764).

“I felt good coming into this World Championships,” said Nicholas. “I had no expectations after a minor setback following a crash at the World Cup in Brisbane in December.

“I felt really relaxed heading to the startline, and was happy I performed well. It was a tough final, to back up against Jaco Van Gass, but I managed to squeeze everything out of myself and luckily get there in the last two laps.”

Reid defended her women’s 500m time trial C2 title in sensational style by breaking her own world record en route to rainbows. Reid stopped the clock in 39.035, half a second ahead of her own world mark (39.505) set at the 2019 World Championships.

After the race, Reid dedicated her victory to her grandfather, who passed away on the morning the team was scheduled to depart Australia.

“This race was one of the hardest races I’ve had to do, this race was for him,” said Reid. “My first lap was fast, and I just had to hold on all the way to the end. The world record was just the icing on top of the cake after the last few weeks.”

Reid then took victory in the scratch race to join Petricola as a multiple rainbow jerseys winner in 2020.

Unfortunately, Donohoe (C5) was unable to defend his individual pursuit crown after crashing in his qualifying heat, after clipping a foam pad while coming out of a turn. Although only suffering abrasions after sliding on the boards, he was unable to finish his heat and did not progress to the finals.

However, Donohoe found redemption on the final day of competition when he stormed to scratch race gold.

“After the disappointment of the individual pursuit, today I was out for redemption, and I think that’s what got me across the line first – I just wanted it that bit more than the rest,” said Donohoe. “It was a brutal race from the start, and I had to take two laps on the field to stay on winning terms, but I really love that aggressive style of racing, so it played into my hands perfectly.

“Every athlete knows the frustrations of something going wrong in their event or not being able to compete, so to end the Worlds on this note takes the pain away from my wounds and puts a smile back on my face.”

Gordon Allan claimed bronze in the men’s 1000m time trial C2, less than two seconds behind France’s Alexandre Léauté (1:11.373), who set a new world mark on his way to winning gold. Allan’s time of 1:12.789 also eclipsed the old world record, before Léauté leapfrogged him to victory.

“I am very pleased from the solid performances from the targeted group of athletes we selected,” said Cycling Australia’s Para-cycling Technical Director, Warren McDonald.

“To finish so high on the medal table, while competing against teams over twice our size, is a testament to the hard work and commitment from all of our athletes and staff.

“While we recognise there is still work to be done, I am confident the athletes and the high performance team behind them are on a trajectory for a successful campaign at the Tokyo 2020 Paralympic Games.”