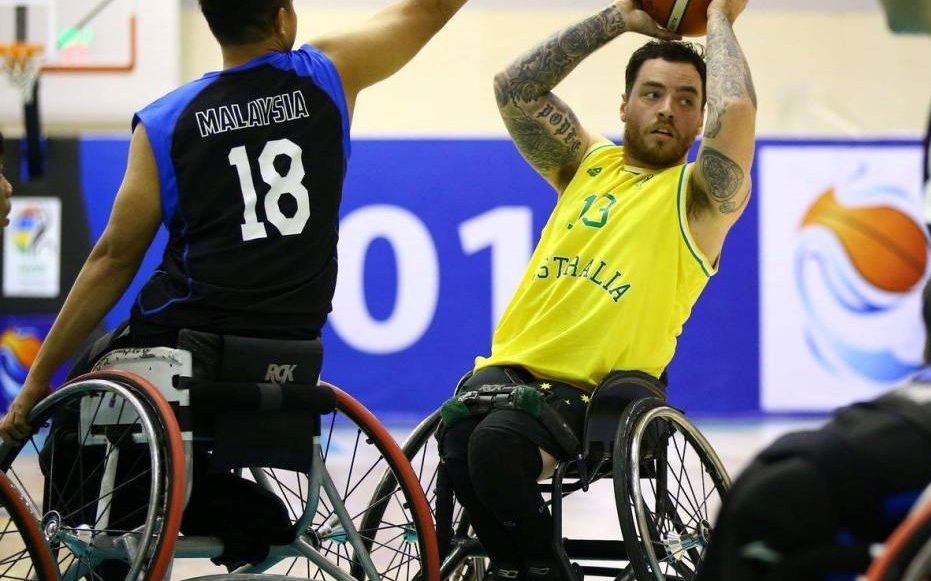 The Australian Rollers have secured themselves a spot in the 2019 International Wheelchair Basketball Federation (IWBF) Asia-Oceania Championships semi-finals, defeating Malaysia by a huge 52 points.

The Rollers set the tone early with relentless defensive pressure, restricting Malaysia from settling into the game. Malaysia had a developing team, and the experienced Australians locked down the chairs around half-court and didn’t allow them to get any quality offence.

Rollers were sharing the ball around early, with some quick points to Shaun Norris, Bill Latham and Kim Robins, while keeping the opposition scoreless.

Dominant in the second quarter were Michael Auprince (10 points), CJ McCarthy-Grogan (12 points) and Brett Stibners (11 points), who all finished the half in double figures. Matt McShane and Sam White provided the grunt work for the Australians, creating easy access to the keyway.

However, Malaysia also found the scoreboard in the second period, putting a solid 16 points on the board.

At half-time, the game was all but over, with the Rollers leading 51-16 and qualification for the Tokyo 2020 Paralympic Games only minutes away.

The Australians pushed out the lead in the third quarter, with solid teamwork and good decision-making. Stibners and McCarthy-Grogan were doing the most damage on the scoreboard, while McShane, Luke Pople and Jay Dohnt were prominent defensively and facilitating on offence. Norris pushed his tally out to 10 points, while Tom O’Neill-Thorne also made an impact on the scoreboard.

Malaysia turned it around in the final quarter, playing a far more upbeat and energised game. However, it wasn’t enough, and the Rollers prevailed with a 52-point victory and qualification for the 2020 Paralympics.

The Australians will now face Iran in the semi-final, which you can livestream tonight at 21:30 AEDT via the IWBF’s YouTube channel.