Missions accomplished for Turner and Clifford 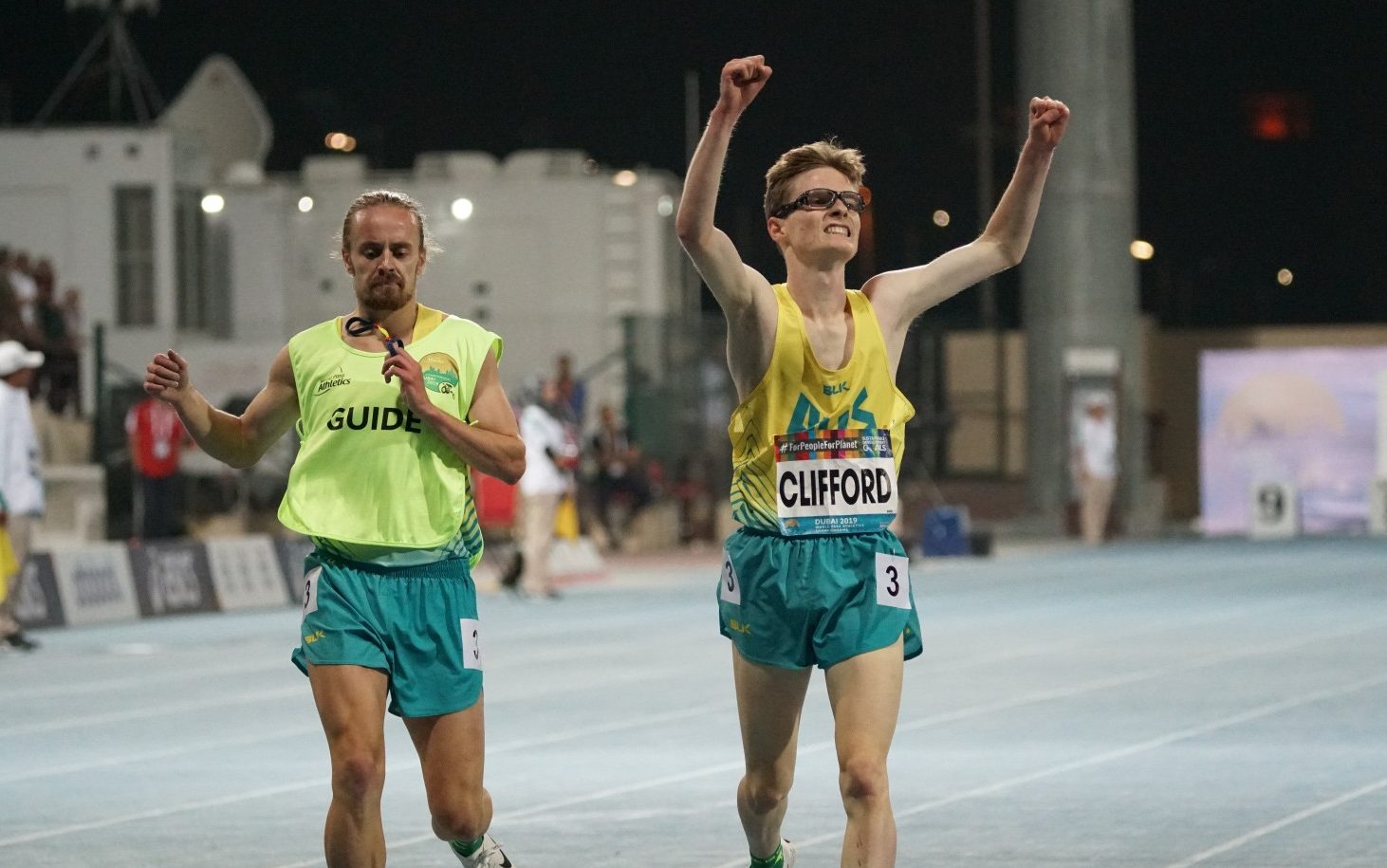 And between them, they’ve collected four.

Clifford dominated the men’s 5000m T13 final, with the help of sighted guides Philo Saunders and Tim Logan, who both ran 6.1 laps each, to take gold after winning the men’s 1500m T13 on the opening night of the nine-day titles.

They delivered Australia’s seventh and eighth gold medals respectively. Along with shot putter Claire Keefer taking bronze in her F41 class, it was another three-medal haul for Australia, or in others words, another solid day’s work.

Turner arrived in Dubai with a revised plan from the World Championships two years ago, and executed it beautifully here.

And alongside his coach Iryna Dvoskina, he won both events in world record times.

“I’ve done my job, so I’m quite satisfied with that. The 51.71 seconds is a PB [personal best], great time, very happy with it,” said Turner of his 400m final, where he caught Russian Evgenil Shvetsov on the bend and burned up the straight to beat him into silver by more than a second.

Shvetsov was the former world record holder for the event, setting it at the 2012 Paralympic Games. Ironically, his time in Dubai broke his own work mark, but Turner was faster.

It was Turner’s fifth gold medal from two World Championships appearances and Australia’s seventh in Dubai.

“I’m going home for a little bit, then coming back to Canberra to start my training early December and start getting right up again,” he said.

“I have both these events again [in Tokyo] and I just want to dominate. I’ve always had a target on my back so I’m going in there to win them again.”

Clifford’s last 5000m run at a major was finished seventh in the Rio 2016 Paralympic Games final. He has come a long way. He is now the world champion for the distance event.

“That is something I didn’t think I was going to hear these Championships,” Clifford said, thinking his best chance for a gold was the 1500m.

“We were attacking this to see how the guiding worked leading into Tokyo. I think it bloody well worked!

“I’ve struggled with 5000m – I love them – but they were becoming too difficult, and even too dangerous,” the 20-year-old said, referring to his deteriorating eyesight.

“But this is what we’ve been working towards for two years. I’m just so relieved and happy that it’s paid off. Double world champion is something I wasn’t thinking of.

“I think winning the 1500m made me super relaxed for this one.”

Saunders, who is Clifford’s coach as well as his guide, said his young charge had the world at his feet.

“He keeps proving every race what an amazing athlete he already is,” Saunders said. “And he’ll keep improving. It was so good to be a part of it.”

Logan meets Clifford every morning at his house before dawn to take him running.

“It’s been a big journey with him so to win the gold with Jaryd and Philo is awesome. Words can’t describe it,” Logan said.

And she made everyone hold their breath in the sixth and final round, when she let out her longest throw of the night 9.19m that moved her back into the medals.

Morocco’s Youssra Karim had shunted the Australian back to fourth in the fifth round.

“It was pretty stressful, but with the last one I thought, ‘Nah – just go for it’,” Keefer said.

“I knew I’d done the work, but it was more mental coming back and thinking there’s nothing to lose. I didn’t come all the way here for fourth.”

Keefer, who took bronze at the Rio Paralympics in this event, also has a bronze from the 2015 World Championships and a silver at the 2017 word titles.

In the other final on the Dubai field tonight, the world’s No. 2 ranked men’s T36 long jumper, Brayden Davidson had a rare off-night, unable to find his best rhythm.

The Rio Paralympics gold medallist, who also took the bronze in this event two years ago in London, finished sixth with 5.37m.

On the track, wheelchair racer Rheed McCracken qualified for Friday’s final of the men’s 800m T34 by placing third in his heat (1:52.07).

“It went pretty much to plan. I just wanted to get through to the final,” McCracken said.

“I finished fourth in London so I wanted to get back into the final and see how I can go.”

McCracken, who took silver in Rio in the 800m, already has a medal from Dubai in the men’s 100m T34 final last Sunday (silver). But the 800m presents a far different style of race.

“You try to find a good wheel and stick on it and hope you’ve got something in the end.”