Lambird eyeing Tokyo as she makes her World Championships debut 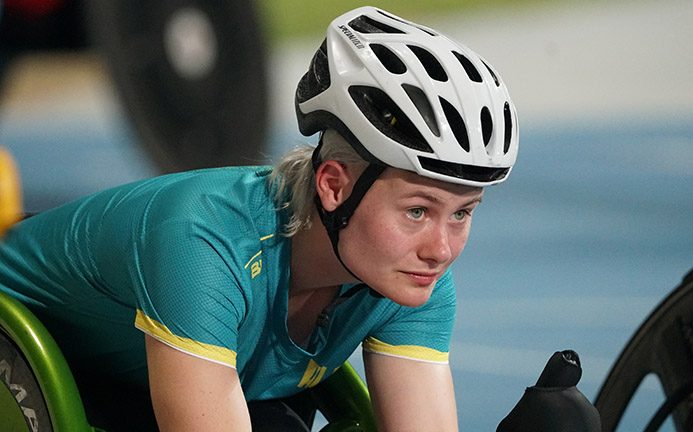 One of the eight debutants on the Australian team, Robyn Lambird, gets her chance to push her claims for the Tokyo 2020 Paralympic Games on day four of the 2019 World Para-athletics Championships in Dubai, UAE.

The 22-year-old has played wheelchair basketball and wheelchair rugby, but since switching to Para-athletics full-time in 2016, she has climbed the ranks quickly.

She competed at three Grands Prix in Switzerland last year in various track events but is concentrating on the women’s 100m T34 in Dubai. The final is raced on Sunday (10 November).

English-born but raised in Western Australia, Lambird’s goal is the Tokyo 2020 Paralympic Games.

Another athlete with dreams to become a Paralympian is the only female discus thrower on the Dubai team, Sarah Edmiston.

The bronze medallist from the women’s discus F44 at the 2017 World Championships, Edmiston wants to not only repeat that podium finish but force her way onto the Tokyo Team for her first Games. Her discus final is also on Sunday morning.

McCracken, a dual silver medallist at the Rio 2016 Paralympic Games, has the heats of the men’s 100m T34 this morning, and hopefully the final on Sunday night, depending on his qualifying time.

Turner, one of Australia’s three gold medallists in Para-athletics in Rio, has the heats of the men’s 100m T36, with the final also scheduled for Sunday night.

The Louise Sauvage-trained de Rozario took gold in the this middle-distance event at the 2018 Commonwealth Games and bronze two years ago at the 2017 world championships.

The 26-year-old will also compete in the 800m and 5000m in her wheelchair class over the next five days, before the world titles wrap up on Friday.