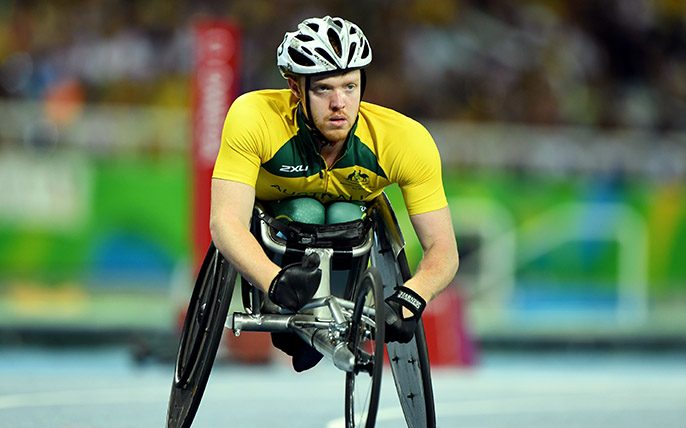 Amid the euphoria of middle-distance runner Jaryd Clifford winning gold in the men’s 1500m T13 on Thursday’s (7 November) opening night of finals, several teammates put their heads down to try to grab their own piece of glory.

Carter was sixth in the 100m final at the Rio 2016 Paralympic Games and would dearly love to get on the podium in Dubai. He won his 100m heat and then dead-heated with China’s Liu Yang in the semi-final in 13.98.

“I knew it was going to be a tougher field, but it’s sort of good to race that kind of field and get out in front,” Carter said.

“I proved to myself I can be up with those guys. It’s all positive for me heading into the final.

“It’s all about nailing the start and keeping things going from there. That’s what I managed to do today with my two races, so I’m happy with that.”

Bailey finished third in his semi-final in 14.44 and automatically qualified for the final.

“It felt good,” Bailey said. “Mentally, I was there and stuck with the bigger guys the whole race. I had enough energy in my tank to squeeze into third place, so it’s all good.

“It’s my first Australian team, first world final. I’m back to the hotel now to have an ice bath and chat to my coach about it all.”

Ballard also finished third in her heat in 17.57, behind Bermuda’s Jessica Cooper-Lewis, but with the top three advancing to the final, she is again at the pointy end of the 100m at her eighth world titles. She took silver in the 100m event at the 2017 World Championships.

“There’s always a few unknowns in your first time out, so I tried to sort out those,” Ballard said. “So it’s good to go through and get the first race out of the way.”

Ault-Connell now gets the chance to claim a third medal at a World Championships, although her last was 13 years ago in Holland in 2006. She left wheelchair racing in 2008 to start a family and only returned last year.

“I’m a pretty good sleeper the night before a race,” said the mother-of-three. “It’s not my first rodeo – been there, felt the nerves before – but it’s just a matter of following your processes.

“It is good to the first one out of the way. Now it’s eat, sleep and back it up on Friday.”

Australians are not featuring in any of Friday morning’s field events, but the evening session will see Australians in three finals.

Meanwhile, Jake Lappin and Sam McIntosh is in the first heats of the men’s 800m T54 and men’s 400m T52 respectively.