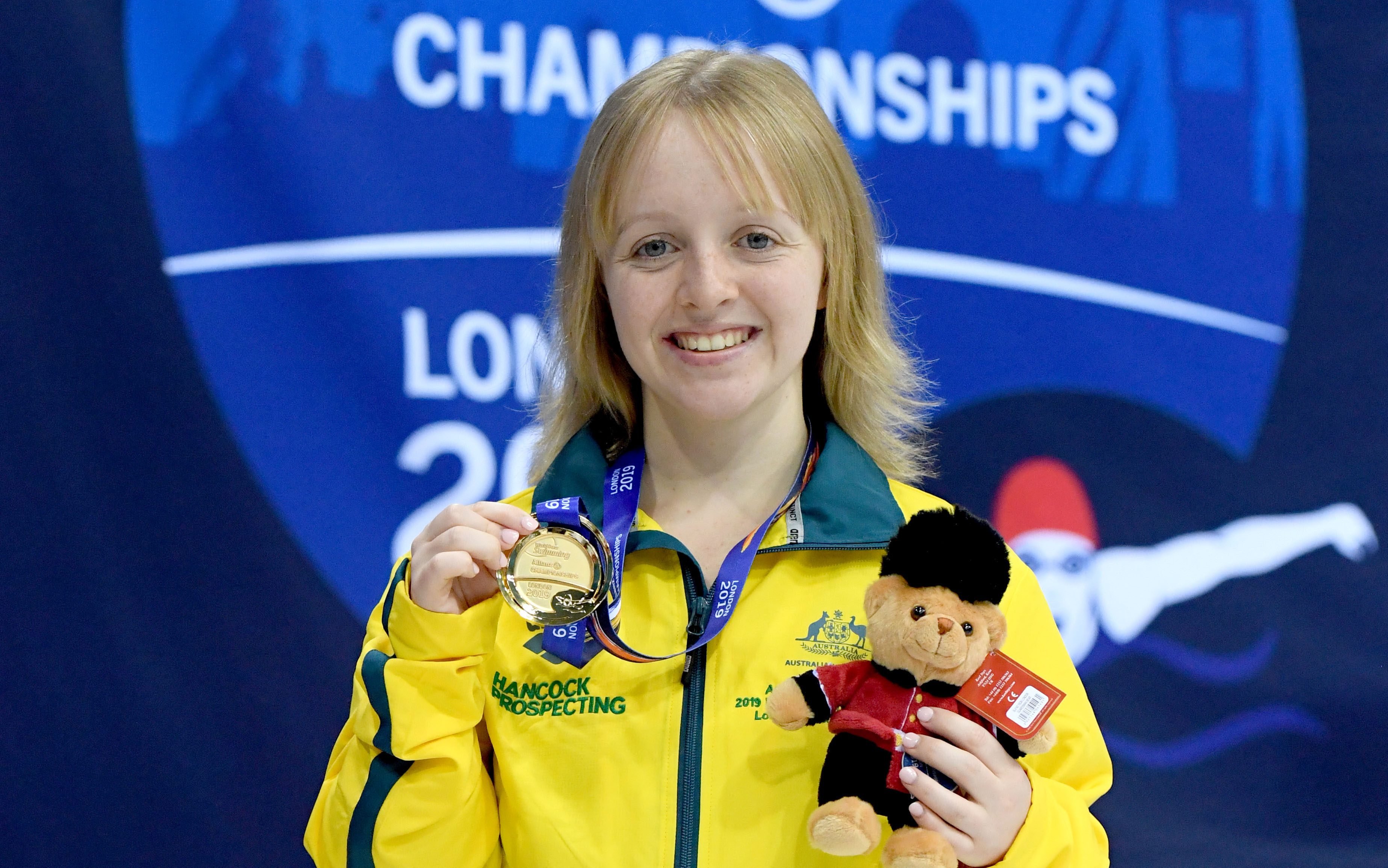 After setting a new Championship record of 1:30.36 and smashing her personal best by three seconds in the heats yesterday (11 September) afternoon, Thomas Kane capitalised on her momentum to secure the gold in 1:30.84. Canadian Tess Routliffe touched for silver in 1:32.39 and Russia’s Mariia Pavlova received bronze in 1:33.74.

Speaking moments after her tremendous triumph, the 18-year-old said she was thrilled to win the Dolphins’ maiden gold medal of the meet.

“I’m still just in so much shock,” Thomas Kane said. “I’m so happy to have brought the first gold medal home for Australia – I can’t believe that just happened.

“In that last 25 metres my body was dying, but I knew I had to push all the way to get that gold medal and I did.

“My strategy was just to do the best I could do. We’d done all the skills before, so I just needed to make sure I delivered on those skills in the race and that got me in the front.

“I could hear my teammates in the crowd and the cooee and thought, ‘The team is behind me so I’ve got to race well for them’.”

Dolphins leader Blake Cochrane also added another medal to Australia’s collection on night three, nabbing bronze in the men’s 100m breaststroke SB7. After a terrific start off the blocks and going head-to-head with Huang Xianquan (CHN) in lane two, Cochrane pulled away and showed his class to hit the wall in 1:18.06 to score the final podium finish. Colombia’s Carlos Serrano Zárate took the gold in a new world record time of 1:11.31.

While Cochrane was pleased to take home a medal, he wasn’t completely satisfied with his performance and will continue to look at ways to improve.

“I always think the best part of my race is the first 15 metres and then everyone plays catch up after that,” Cochrane said. “It was just unfortunate I wasn’t able to put together properly those last 20 metres. I was probably hurting a bit too much, but I picked up a bronze medal, so that’s alright.

I came in here this week to try and put some processes together to really set myself for a really good time. I was hoping to get down to 1:16 and I was a little bit off where we needed to be, and I’ll have a look at where that went wrong.”

Swimming from lane two in the men’s 100m breaststroke SB14, Dolphins rookie Jake Michel made a brilliant start to his first World Championships, placing fourth overall in his debut final. His time of 1:07.88 set a new Oceanian record, which had previously been held by fellow Aussie Richard Eliason (1:08.62) since 2013.

Speaking after his first outing in the green and gold, Michel said he gained plenty of knowledge and experience from competing against the best in the world.

“It was so exciting to represent my country for the first time,” Michel said. “I’m very happy. I’m a bit speechless about the record, it’s still sinking in a bit.

“To gain that experience and know what I have to work on when I get back at training, so I can come back even stronger, is great. Maybe I’ll come back and get a podium next time, I’m looking forward to that.”

After taking home a bronze medal on night two in the men’s 100m backstroke S9, Auburn’s Timothy Hodge made another appearance in a final. Touching in a personal best time of 1:02.09 in the men’s 100m butterfly S9, Hodge placed seventh overall. In what was a nail-biting race, less than two seconds separated first from eight, with Italian teammates Simone Barlaam and Federico Morlacchi both clocking 1:00.36 to claim gold.

Already with a bronze medal to his name this week, Rowan Crothers lined up for his second race of the meet – this time in the men’s 400m freestyle S10. Fighting against tough competition in a hot field, Crothers went out hard from lane five, but couldn’t quite maintain the speed for the length of the race and finished fourth in 4:11.99. Ukraine’s Maksym Krypak won gold in a new Championship record time of 4:01.17.

In the corresponding event for the women, Monique Murphy also placed fourth after toughing it out all the way to the wall. Edging back and forth for bronze throughout the 400m race, the Dolphins leader recorded a time of 4:35.71 – six seconds faster than her heat swim – and not far off her personal best.

After the third night of the competition, Australia sits 13th on the medal table, with one gold, four silver and four bronze.