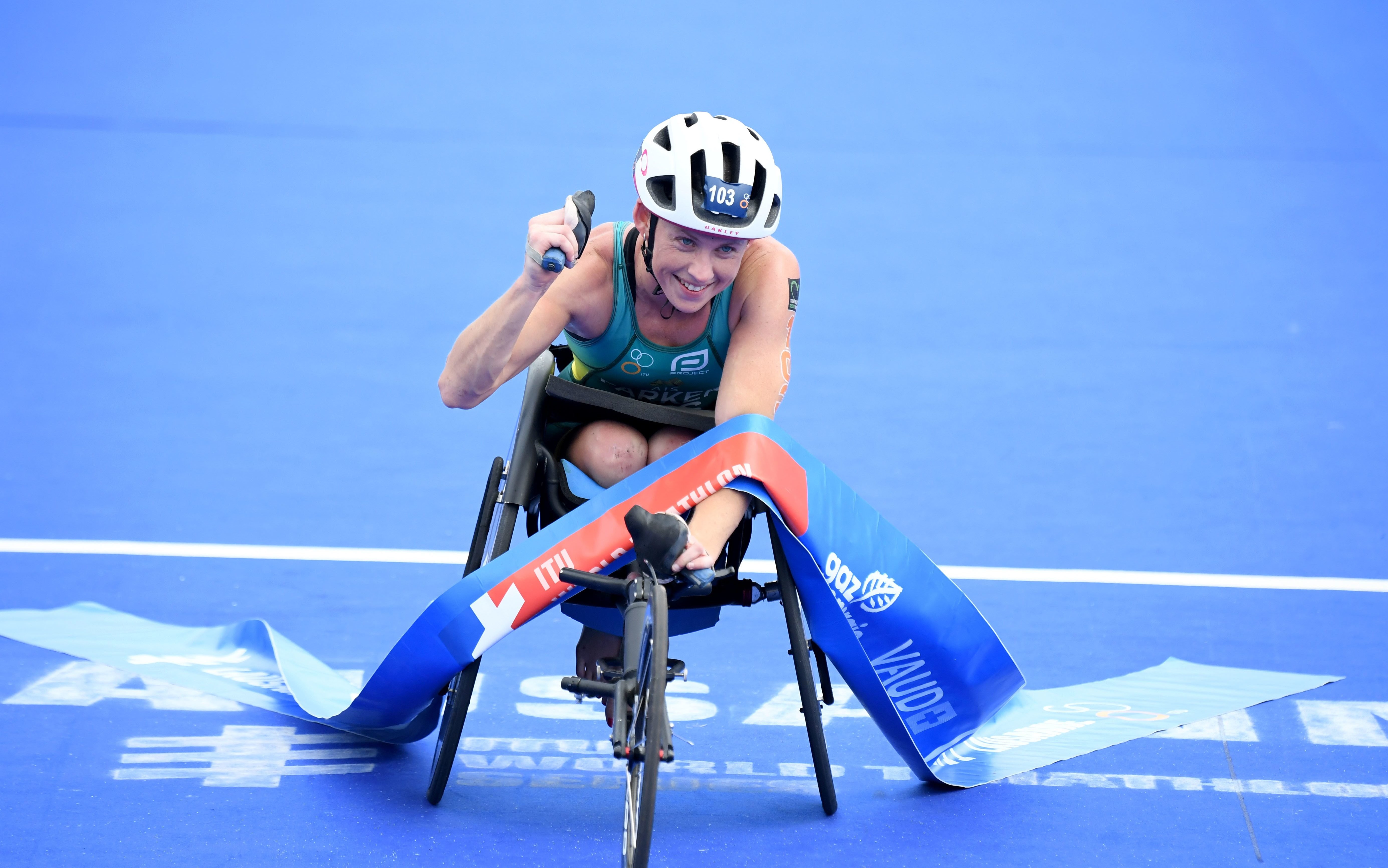 Taking the tape just over two minutes ahead of her nearest competitor, Parker put together a dominant race from start to finish to claim her maiden world title, with the feat coming less than two years after the 31-year-old made her Para-triathlon debut.

“I can’t even put into words how I’m feeling,” Parker said. “I’m just so happy.

“The whole day went my way, starting off from a great swim. I felt great on the bike and great on the run as well.”

Parker’s coach Dan Atkins told Triathlon Australia that he was pleased with the result, with Parker’s preparation clearly paying off.

“I won’t lie, I got a lot of goosebumps out there and got a bit emotional,” Atkins said.

“It’s been a really hard road for Loz [Parker] and we’ve been preparing for this race for well over a year now. We targeted it and executed it absolutely perfectly – I’m one happy coach.”

Making the victory all the more sweet for Parker, it comes off the back of a difficult 12 months which has seen her preparation and training punctuated by ongoing health issues.

Setting her gold medal intentions from the outset, Parker wasted no time in getting her race off to a cracking start, laying down a blistering 12.46 swim to put the field on the back foot. Keeping up the pace, Parker forced eventual silver and bronze medallists Kendall Gretsch (USA) and Christiane Reppe (GER) to make chase through the bike and run. However, their efforts were to no avail, with Parker keeping hold of her commanding lead right until she crossed the finish line.

It was not quite the day defending world champion Emily Tapp would have hoped for, with arguably the most physically demanding course of the season causing some difficulty for the 28-year-old. Digging deep, she held on to secure an honourable sixth place.

David Bryant put together a strong race in the PTS5 class to take eighth, despite narrowly missing out on a top five finish after being outrun by Jairo Ruiz Lopez (ESP), Carlos Rafael Viana (BRA), Günther Matzinger (AUT) and Juan Carlos Cano Espinoza (MEX) in the final stages of the race.

Sally Pilbeam claimed fifth in a fierce PTS4 race that saw Hannah Moore (GBR) secure herself a stunning win off the back of a lightning fast swim.

Kate Naess pushed herself through a difficult run to claim sixth in the PTS5 class, with British powerhouses Claire Cashmore (GBR) and Lauren Steadman (GBR) backing up their solid performances from last month’s test event in Tokyo, Japan, with first and second, respectively.

Jonathan Goerlach fought back from a tough swim to take seventh in the men’s PTVI, while Katie Kelly (PTVI) and Nic Beveridge (PTWC) overcame the arduous bike course to secure eighth and ninth in their respective classes.

#ThrowbackThursday: The Woman Who Started It All

#ThrowbackThursday: Austin powers his way to gold in Athens