Lucky strikes on Friday the 13th 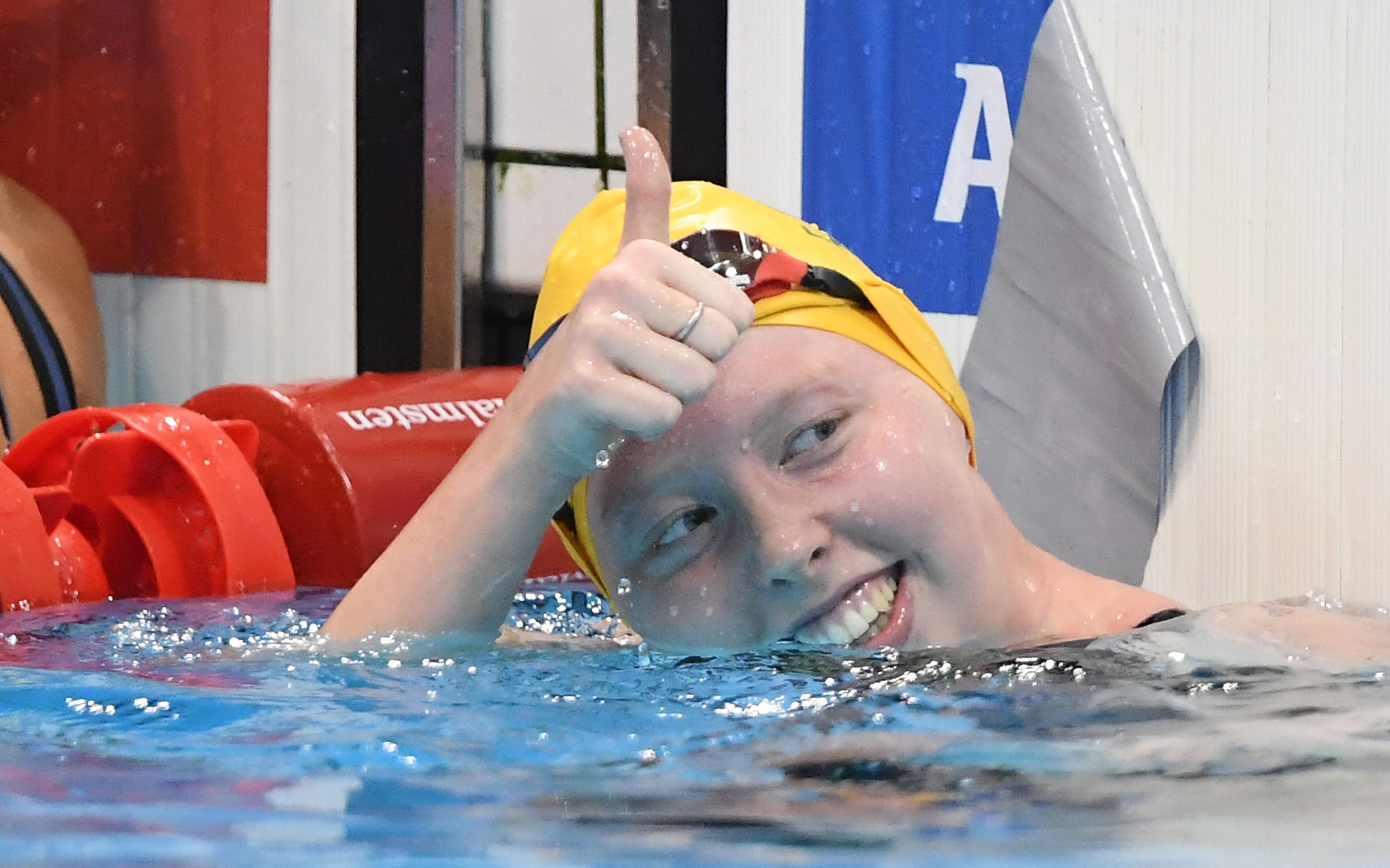 Lakeisha ‘Lucky’ Patterson is the new world champ in the Women’s 400m Freestyle S9, after blitzing the field to secure Australia’s second gold medal of the World Para Swimming Championships at the London Aquatics Centre.

The Queenslander led the field from the moment she jumped off the blocks and increased her lead with every turn until she hit the wall in 4:38.29. Her time saw her set a new Oceania Record and finish nearly five seconds in front of silver medallist, Great Britain’s Toni Shaw, who clocked 4:43.20. The race proved fruitful for the Dolphins, with fellow Aussie Ellie Cole picking up the bronze in 4:45.56 – adding to her silver from night two.

Patterson’s top honour marked her first individual world championship gold and, contrary to her nickname, there was no luck involved – just plenty of hard work.

“It’s so exciting, I raced on day one and then I had three days off to wait until my main event on day five, so to be able to get in there and get the job done is incredibly exciting,” she said moments after her victory.

“I’ve been training really hard and I knew that I was capable of doing it, I was slightly off my PB so I’m a bit annoyed about that, but at the end of the day it’s about who can get their hand first on the wall and I was able to do that, so I’m really proud of myself.”

Patterson’s training teammate Brenden Hall collected a silver medal for the Dolphins on night five, posting 4:17.44 in the Men’s 400m Freestyle S9. In a tough and gritty race, the 26-year-old went stroke for stroke with his competitors, with only 0.27 seconds separating first from second. Auburn athlete Timothy Hodge also competed in the final, clocking 4:23.80 to place sixth.

As the reigning Paralympic champion, Hall admitted he was disappointed he won’t be taking home the gold, but nevertheless, is eager to improve and head into next year as the underdog.

“Look, I’ve got to be honest, I’m disappointed. I’ve put a lot of work into it and unfortunately it doesn’t come together in the end and that’s the disappointing part, but you know I’m still happy to pick up silver for Australia,” he said post-race.

“Taking the positive out of it, I haven’t been the underdog in ten years so I can go back to being the underdog and come back stronger – get a bit more mongrel in me, this old dog can learn new tricks, so we’ll see how we go.”

Chandler’s Rachael Watson left nothing in the tank as she battled it out with her Italian counterpart, Arjolain Trimi, in the Women’s 50m Freestyle S4 event. Going head to head for the length of the pool, Watson touched just 0.60 seconds behind to take the silver in 40.62. It marked the Rio Paralympic champ’s first medal of the meet.

“It’s really amazing, I came here for a good result and I got that so I’m happy,” she said.

“To hear the Aussies in the crowd and know that all of Australia is behind you and rooting for you is such a good feeling.”

An elated Col Pearse powered to the wall in the Men’s 100m Butterfly S10 to pick up his first world para championship medal. After setting a new Oceania Record in the heats this morning, the 16-year-old debutant pushed himself further and broke it again, putting another personal best of 58.60 on the board. Fellow rookie William Martin – who was swimming in his very first final – placed fifth in 59.12.

Grinning from ear to ear, Pearse was almost lost for words post-race.

“I can’t really believe it, honestly, I didn’t come into this final expecting a medal, I was just expecting a fourth or fifth or a really good PB, but I got the full package, a PB and a bronze – I’m just so stoked.

“In the heat I went out a bit hard so in the final I wanted to take it easy in the first 50m and bring it home in the last. When I looked up, I was just shocked – I’m so shocked I don’t know what to feel right now,” he exclaimed.

Challenging in her fifth final at the champs, Jasmine Greenwood achieved a well-deserved podium finish, placing third in the Women’s 100m Butterfly S10 in a personal best time of 1:07.69. At just 14 years of age Greenwood is Australia’s youngest competitor, with this accomplishment marking her maiden world championship medal. Leading for a good portion of the race, the young Bay & Bay athlete was only 0.62 behind gold medallist Mikaela Jenkins (USA), who touched in 1:07.07. Monique Murphy also represented Australia in the race, placing eighth in 1:13.48.

Delighted by the result, the humble teen was still letting the good news sink in.

“It feels amazing, I wasn’t expecting a medal – a PB is good and so to get a medal on top of that is just amazing,” she said.

“I knew I was in the mix but didn’t know what place I had gotten, and then I looked at the board and was so just excited.”

Western Australian Ben Popham snared his second medal at champs on Friday night, sneaking in for bronze in the Men’s 50m Freestyle S8. With the aim of posting a time in the 26s, Popham achieved his goal and set a new personal best of 26.94 to take the final place on the podium. In an extremely tight finish, only 0.40 seconds separated first from third.

In the men’s and women’s 200m individual medley SM7 events, Matt Levy placed fifth in 2:38.39, while Tiffany Thomas Kane – who picked up Australia’s first gold medal on night four – also placed fifth in her final in 3:07.55.

Rookie Ella Jones competed in her second final of the meet, placing sixth in the Women’s 50m Freestyle S8 with a time of 31.80, while in the Women’s 200m Individual Medley SM13, Jenna Jones placed sixth in a personal best time of 2:36.40.

In one of final events of the night, Tim Hodge (backstroke), Tim Disken (breaststroke), Col Pearse (butterfly) and Matt Levy (freestyle) competed in the Men’s 4x100m Medley Relay 34 points. In a close race to the finish line, the Aussies narrowly missed out on a podium finish, clocking 4:18.40. Russia, Italy and China took the gold, silver and bronze, respectively.

After the fifth night of the competition, Australia sits 14th on the medal table, with two gold, six silver and 10 bronze.