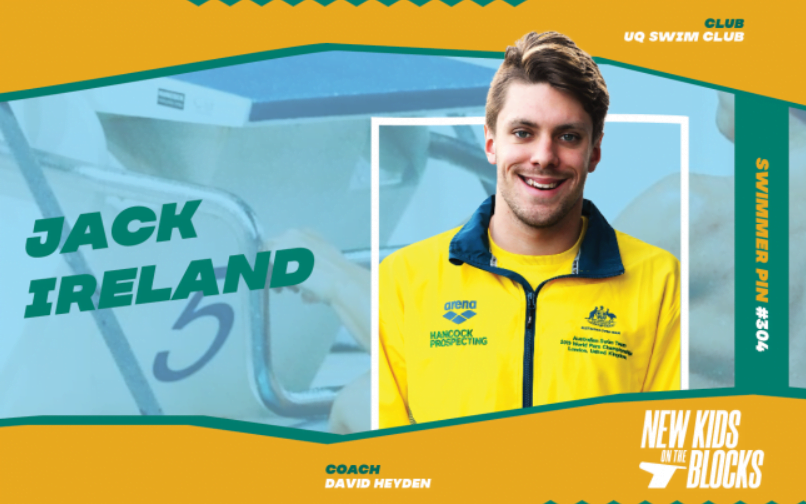 The moment that Jack Ireland was told that he was going to represent Australia at the 2019 World Para-swimming Championships was one of the proudest of his young career.

As one of nine rookies set to make their maiden appearance on the international stage this September, Ireland’s selection was reward for the stellar performances he put in at the 2019 Australian Swimming Championships in April, where he won a bronze medal in the men’s 200m freestyle multi-class and achieved top 10 results in five other races, including in the backstroke, butterfly, freestyle and individual medley disciplines.

Ireland’s swimming journey began in Newcastle, NSW, where he attended Floraville Public School and learnt to swim at Swansea Sharks Swim School. When he was 13 years old, he moved to QLD and began swimming at the University of Queensland Swimming Club under Head Coach David Heyden.

Heyden has been priming the freestyle and individual medley specialist for the upcoming Championships, with Ireland noting that he has been doing “a lot of hard sessions in the pool and lots of gym sessions”.

“I do nine sessions a week in the pool and they each go for two hours,” Ireland said.

Further proof of his training regime paying off came at the 2019 World Para-swimming Series in Melbourne, VIC, where he won a bronze medal in the men’s 200m freestyle multi-class.

Looking ahead to next month’s World Championships, the 2016 Australia Day Junior Athlete of the Year said he’d love to make a final in his first outing.

“It’s going to be a good feeling to pull on the green and gold for the first time.

“I just want to do my best, hopefully record a personal best and make a final.

The 2019 World Para-swimming Championships take place at the London Aquatics Centre from 9-15 September. You will be able to catch all the action live on the 7plus app.