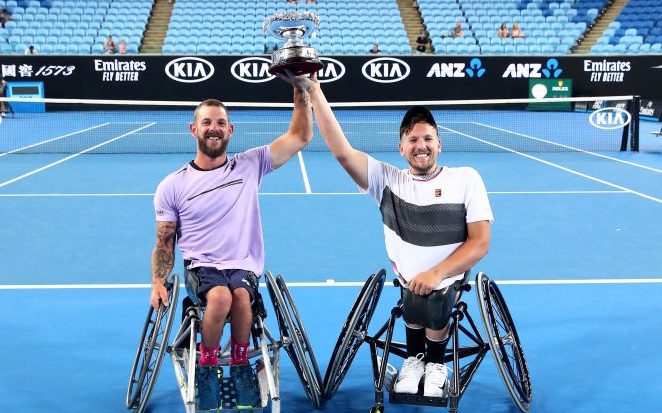 The scorching heat in Melbourne did not stop Dylan Alcott and Heath Davidson from putting on a masterclass, as they defended their Australian Open quad doubles title overnight (24 January).

The reigning Paralympic champions defied the 40-degree heat to win their straight-to-final match against Great Britain’s Andy Lapthorne and the USA’s David Wagner 6-3, 6-7, 12-10.

The one hour-and-54-minute match was gruelling, but the duo were not prepared to let their crown slip away. While Lapthorne and Wagner had the upper hand at first, winning the opening two games of the match, the Australians were lifted by an enthusiastic home crowd.

After the power shifted back to the international pair in the second set, it was in was the deciding set that Alcott and Davidson left nothing in the tank to take the match after 22 enthralling games.

“They’re always tough for us,” Alcott said. “Wagner is an old veteran – pokes it around and doesn’t give you what you want.

“They hit a lot of balls to Heath today, which was awesome. He played so well.

“But we pride ourselves on playing ’til the last point. I also pride myself on being level-headed the whole time, and I think that really helped us.”

With just one double fault in contrast to Wagner and Lapthorne’s five, and a higher first-serve percentage (81 per cent to 75 per cent), Alcott showed why he has recently regained his world No. 1 ranking, and Davidson, why he is one to watch in the lead-up to the Tokyo 2020 Paralympic Games.

Despite their individual skill sets, both athletes credited their friendship on and off the court, as well as the home crowd, for their win today.

“We’re mates off-court. I think that’s why our chemistry is so good on-court,” Davidson said.

“You can tell – we’re always smiling, we don’t yell at each other. We’re a good pair.

“I’ll tell you also, the one thing that really helped us was the massive crowd. As I said a few years ago, we’re used to playing in front of a handful of people. After the Paralympics, the Newcombe Medal [Alcott won the 2016 Newcombe Medal], broadcasters, all that kind of stuff, people come down and watch now, and that’s so cool.”

The victory yesterday was not the first for either Alcott or Davidson at this year’s Australian Open, with both having won their singles matches.

The Australian pair are ready to celebrate a combined nine Grand Slam victories. But first – both will prepare for their final round-robin matches today, with Davidson fighting for a spot in the final against Alcott, who is so far undefeated.