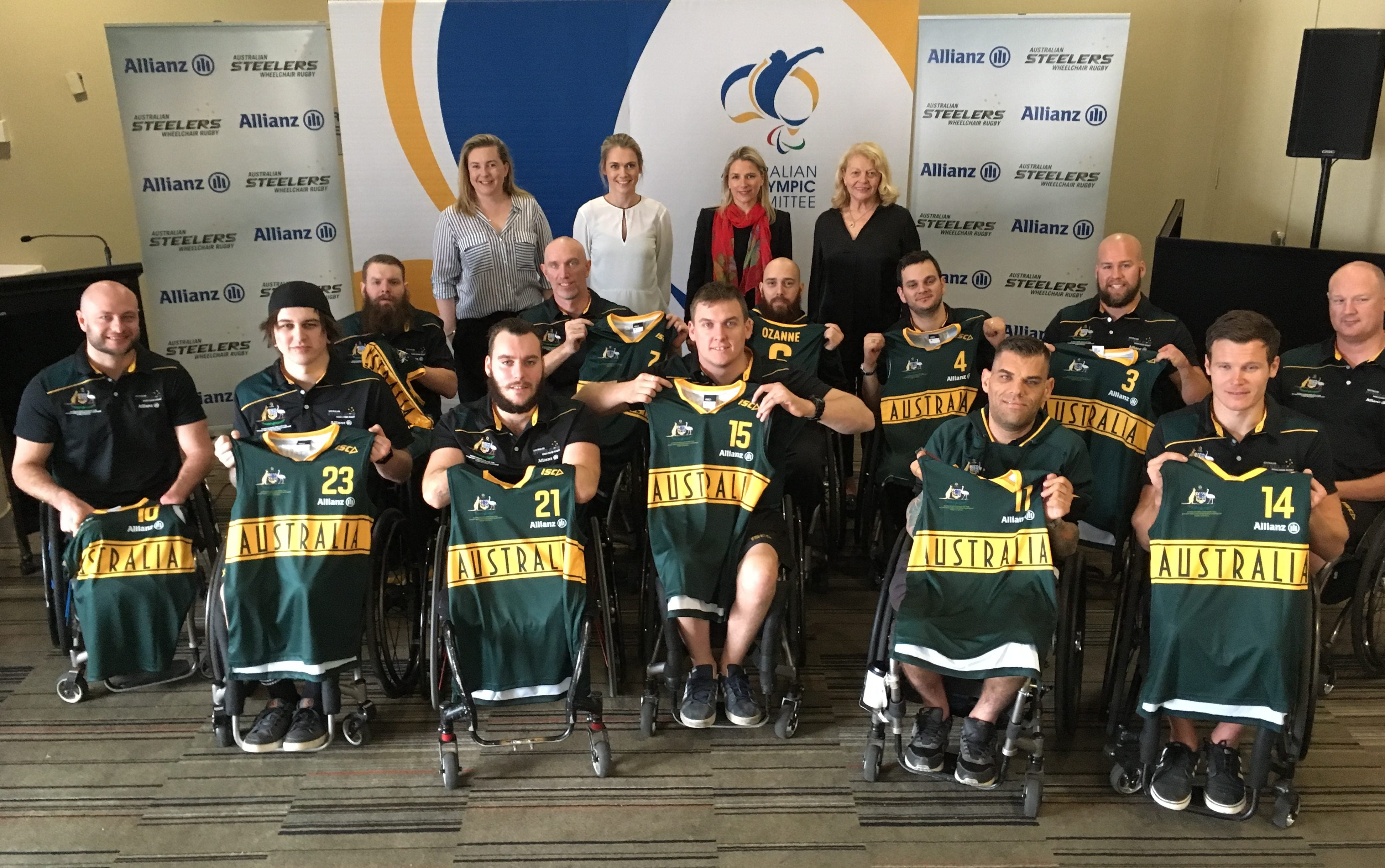 For an Australian athlete, receiving a green and gold jersey is a moment that signifies the reward for years of hard work, determination and sacrifice.

The Australian wheelchair rugby team enjoyed that moment today in Sydney, when they were presented with their jerseys for the 2018 IWRF Wheelchair Rugby World Championships beginning on Sunday.

Preparing to defend their world championship crown and become the first nation to secure the title on home soil, the 11-strong Steelers line-up took time out of their busy training schedule today to reflect on their journey to this point and think about the weight of expectation now placed upon them.

Australian Paralympic Committee Chief Executive Lynne Anderson was on hand to congratulate each athlete on their achievements so far, as Australian captain and four-time Paralympian Ryley Batt presented the jerseys to each of his teammates.

“The Australian Paralympic Committee is immensely proud of the Australian Steelers and the role we play in managing the Australian wheelchair rugby high performance program, and I’d like to congratulate each athlete for their efforts in getting to this point,” Anderson said.

“It’s so wonderful to be part of this occasion and to watch the athletes all earn the honour that so many people dream about – wearing the Green and Gold of Australia. Each athlete has done the work required, made sacrifices and now, it’s about seizing the opportunity.

For the Steelers’ most experienced athlete Ryan Scott, receiving his fifth world championship jersey conjures up excitement and an enormous sense of pride as he prepares to compete in the city where his love of wheelchair rugby took hold almost two decades ago.

“I remember watching the Sydney 2000 Paralympic Games and after watching it, I knew it was something I wanted to be a part of,” Scott said.

“I remember going home and quitting school and thought ‘I want to be a wheelchair rugby player’.

“It’s taken 18 years to finally get a home major event and it’s just so exciting.”

And for Perth local Jake Howe who will don the green and gold for the very first time at a major event, the occasion today left him at a loss for words.

“You can’t really put it into words what it means to be representing Australia. It’s just one of those things I didn’t think would ever happen and now it’s come along and it feels really good.”

Batt also presented a jersey to the team’s major sponsor Allianz Australia. Sascha Hunt, GM of Brand & Advertising at Allianz Australia thanked Batt and the Steelers and emphasised the importance of their partnership.

“I’m thrilled to be here today on behalf of Allianz Australia to show our support for our incredible Australian Steelers team as they receive their jerseys,” Hunt said.

“Allianz has been a proud partner of the International Paralympic movement for more than a decade, and here in Australia, we are proud of our partnership with the APC which now spans more than seven years.

“Wheelchair rugby most certainly isn’t for the fainthearted and is one of the world’s toughest sports. Not only have each of the Steelers mastered this sport, but they have become world champions and we are all proud of their achievements.

“Everyone at Allianz Australia would like to wish the Steelers all the very best of luck for the 2018 IWRF World Championships and we are with them all the way.”

The IWRF Wheelchair Rugby World Championships begin this Sunday and conclude on August 10. Tickets can still be purchased at www.2018wrwc.com