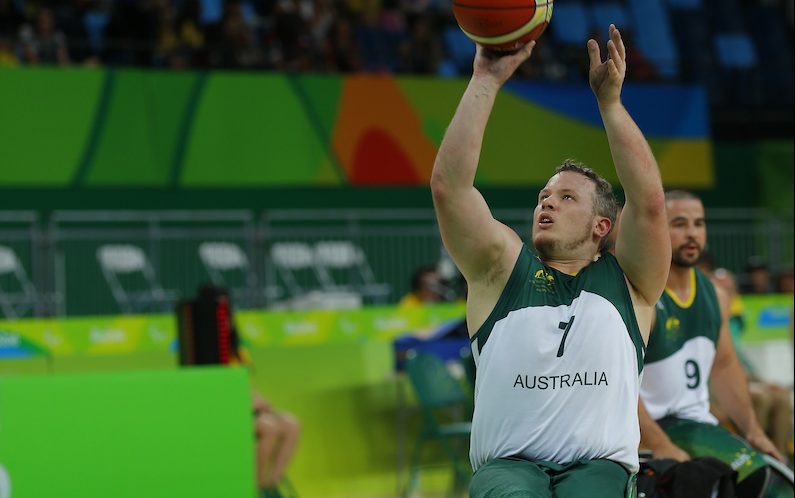 The Australian Rollers have begun their Wheelchair Basketball World Championship title defence with a closely fought 74-55 victory over Argentina.

Kim Robins was able to get the Rollers campaign underway with the first points of the tournament for the Australians knocking down an uncontested mid-range shot.

The size of Australia’s high-pointers proved to be a tough mismatch for their Argentinian opponents, with the Rollers looking for Brett Stibners inside early, who was able to convert multiple shots under the basket into valuable baskets for the Rollers.

While the high-pointers were the main targets, Tom O’Neill-Thorne was able to create his own points shooting an impressive 53% in the first quarter.

Defence was the main point of emphasis for the Rollers who ran a full court press for the entirety of the game, which wore down Argentina toward the end of the first, forcing an eight second backcourt violation. Australian Captain Shaun Norris was able to help reward his teammates, turning their defence into open layups.

O’Neill-Thorne was able to remain in the action to round out the quarter, timing a nice steal to stop a certain Argentinian fast break.

The second quarter began with some nice ball movement from the Rollers, ending up in the hands of Jannik Blair who was found with an open shot at the free-throw line, which he gladly knocked down.

Tristan Knowles scored his first points of the tournament from the baseline as he found himself open in the midrange.

Michael Auprince looked to ramp up the defensive effort for the Rollers, swatting away a shot from under the basket which had the crowd, which included the victorious Gliders, get right behind the Australians.

Australia found it easy to make its way into the paint, making the most of Argentina’s ball watching, highlighted by a Knowles basket to beat the shot clock, which went from heavily guarded to uncontested with a simple move from the veteran.

Proving too big inside, the Rollers were able make the most of their missed shots with Auprince and Stibners using their height advantage to create second chance opportunities inside, combining for six offensive rebounds.

Half-time saw the Rollers regroup and continue their defensive pressure, continuing to run a full court, which had proved effective through the first two quarters.

The press worked almost instantly, creating enough pressure to have Argentina heave the ball up the court and Kim Robins staying in position at safety to create the charge call.

Norris found open space in the paint, using the mere threat of big man Bill Latham, who Argentina could not leave open, to create a gap which saw the Captain take a rolling bank shot for his third make of the game.

The pressure from the Rollers group was proving effective, wearing down Argentina and forcing their opposition to commit unnecessary mistakes, including four team fouls halfway through the third term.

Norris took it upon himself to lead his team, knocking down a massive three and following up with a block on the next defensive possession.

The Rollers would not let up on defence continuing their full court pressure and creating another eight second violation, which once again they were able to convert into another scoring opportunity this time through Luke Pople.

The mid-point line-up of Norris, O’Neill-Thorne and Robins returned with some zest on defence pushing the game out to 51-40 with 6 minutes to play in the third.

Australia continued to run their mid-point line-up throughout the game, with the low pointers in Sammy White, Jannik Blair and Matt McShane doing an excellent job sealing out the Argentinian high-pointers to give the Australian mid-pointers open looks.

The fourth quarter had the Rollers rely on their speed and stamina to apply further pressure to their opposition, with the low-pointers working hard to set strong picks, frustrating Argentina and leading to many more uncontested shots.

O’Neill-Thorne once again found himself involved with much of the scoring in the game, finishing off a nice pass from fellow Queenslander McShane before finding Latham open in the paint on the next possession, helping to finish off Australia’s game.

Blair was able to round out the Roller’s first game hitting the final shot, sealing an impressive victory for Australia.

O’Neill-Thorne led all scoring with 17 points, along with four assists and three steals in an impressive all-around performance.

Captain Shaun Norris had 14 points, along with six assists while the duo of high-pointers in Auprince and Stibners were able to combine for six offensive rebounds.

Due to technical issues, statistics are unavailable for this game, however you can watch the entire replay here.

The Rollers are back in action Saturday night where they will face Spain who are be playing their first game of the tournament.