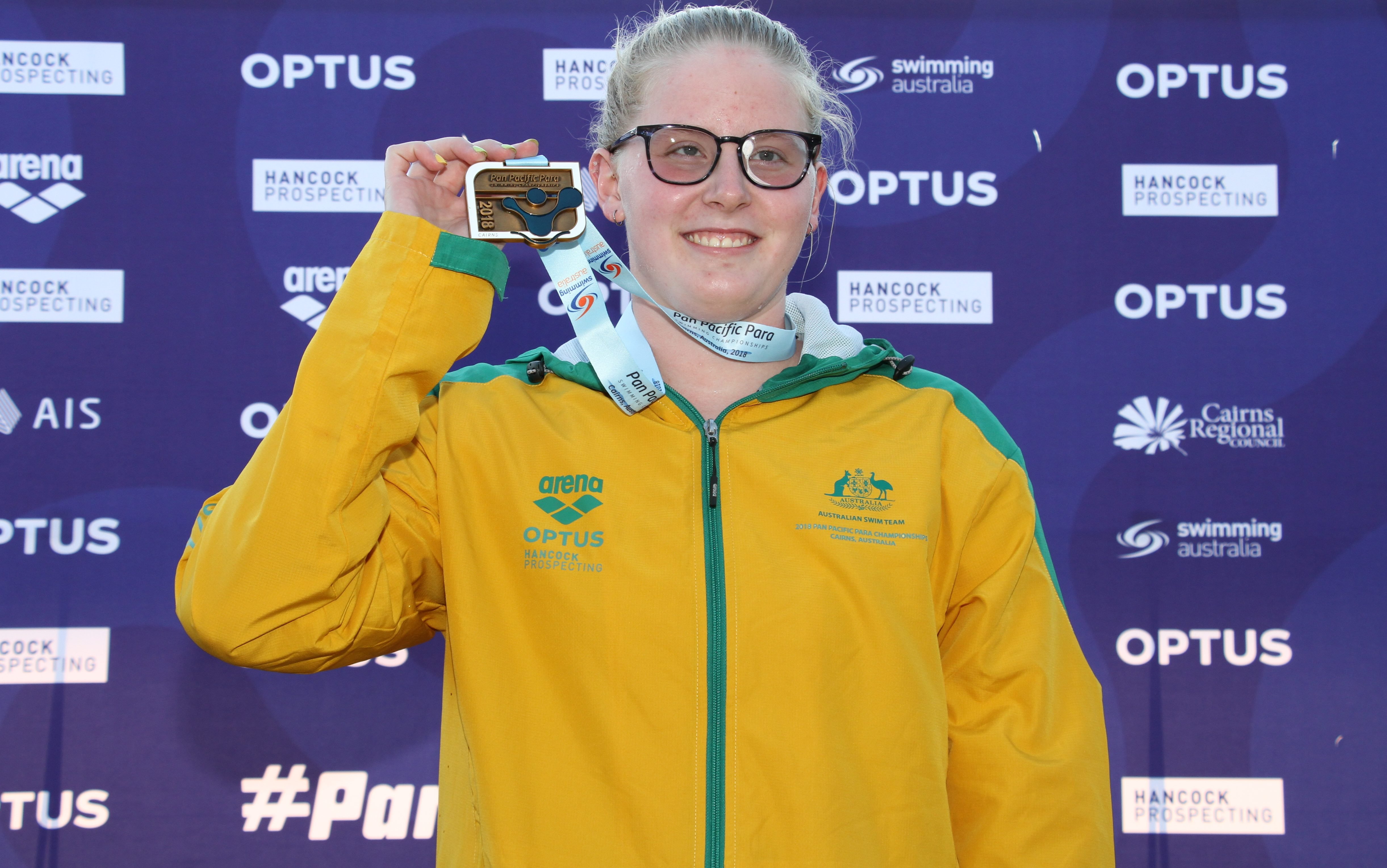 Katja Dedekind, Ellie Cole and a host of Dolphins have continued the gold rush at the Pan Pacific Para Swimming Championships in Cairns, with Australia now sitting on a total of 31 gold medals for the meet.

Just a few days shy of her 17th birthday, Dedekind produced the fastest 100m backstroke of her career to take gold and make her in intentions clear some two years out from the Tokyo Paralympic Games.

“I did a really good time this morning and I was really determined to go under that 1.11 again. It’s the first time I’ve done that the whole year and it’s great to do that in front of a home crowd and my family,” said Dedekind.

“I did a 1.10 last year for the Worlds trials and I haven’t done a good time since then, so I’m really happy to do something two seconds under my Rio time.”

“Doing that time today, and after the way I’m feeling after a few days of racing, means it’s really looking good for Tokyo.”

Training alongside Paralympic superstar Ellie Cole at the USC Spartans club on the Sunshine Coast, and a rookie on the team in Rio, Dedekind said she just loves being part of the Australian team and can’t wait for 2020.

“It’s amazing and I love every minute of it, and having Ellie Cole there to train alongside with her and her backstroke just makes me so better as an athlete and a person.”

Cole cruised to victory in her main event, the 100m S9 backstroke, hitting the wall in 1.10.73 but was the first to admit that she will need to swim faster, against tougher competition, if she’s to medal in the event in Tokyo 2020.

“Backstroke is an event that I’ve been working on for a long time and I’ve kind of strayed away from my PB over the last year or two. And that’s probably one of the better results I’ve had in a while,” said Cole.

“I really want to do 1.07 for Tokyo, that’s what’s going to put me in a gold medal position. The time I did not probably won’t get me a medal to be honest.

“Most of my competitors are in Great Britain and Spain, but it’s great that I get practice in racing some of the American’s here. One of the girls in my race Hannah Aspen, she won bronze in Rio, so there is still good competition here to push me. I won that by a fair bit but I’m definitely not sitting in comfort because I know there are so many athletes out there that could easily overtake me.”

Hitting the wall almost a second and a half faster than their fifth place effort in Rio at the Paralympic Games, the team of experience and youth should only improve over the next two years.

Lakeisha Patterson started the night well for the Dolphins winning gold in the women’s S8 100m backstroke, for her second individual gold of the meet, hitting the wall in 1.18.92.

In the S10 100m backstroke, Katherine Downie picked up bronze for Australia with a time of 1.12.06 behind Aurelie Rivard from Canada and gold medallist Sophie Pascoe from New Zealand who won in a time of 1.09.05.

Backing up from her strong 200m IM last night, S14 swimmer Taylor Corry stepped to the top of the medal dais again this time taking gold in the 100m backstroke, with her Dolphins teammate Jaime-Lee Getson winning the silver.

Timothy Hodge also returned after a strong 200m IM last night for another personal best, this time by just point two of a second to win gold in the men’s S9 100m backstroke.

Hodge led from start to finish to hit the wall in 1.03.68, while Queenslander Logan Powell picked up his second silver of the meet, just shy of a personal best to finish in 1.05.67.

Jesse Aungles was also amongst the silver medals finishing second in the S8 100m backstroke in 1.09.12, behind American speedster Robert Griswold who clocked an impressive time of 1.04.43 for gold.

Vision impaired swimmer Jeremy McClure from Perth won gold in the S11 100m backstroke with a time of 1.12.92, a couple of seconds outside of his fifth place at the Rio Paralympics, while Jacob Templeton took silver in the S13 100m back in 1.04.01, and Liam Schulter picked up bronze in the S14 100m backstroke in a time of 1.04.40.

The final individual event of the night saw Matthew Levy win silver in the S7 50m butterfly in a time of 31.79, with Rohan Bright taking bronze in 32.35.

The Pan Pacific Para Swimming Championships at the Tobruk Memorial Pool in Cairns will continue tomorrow morning from 10am, with all the heats action live online at www.swimming.org.au