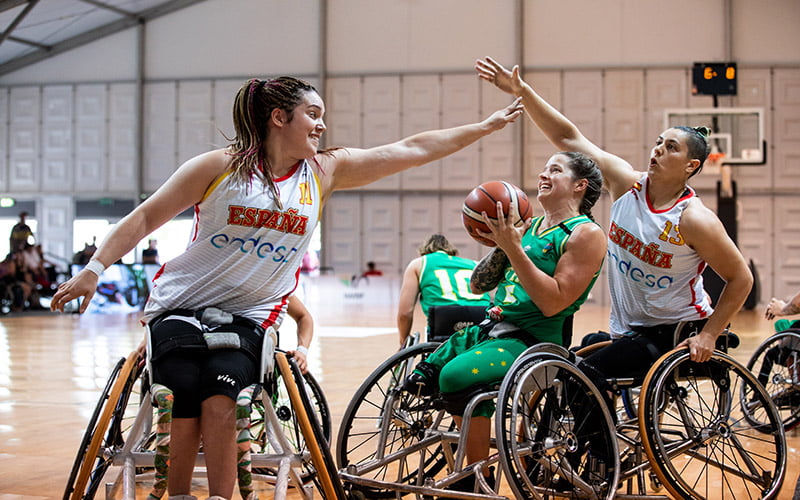 The Australian Gliders have fallen short of Spain, 43-48, in their final game of the 2018 IWBF World Championship group stage to end their hopes of reaching the finals.

Playing impressive defence all game that saw them force 33 turnovers while committing just 14 themselves, the Gliders’ downfall proved to be their offence as they struggled to hit the scoreboard all night, shooting 29% as a team.

Once Spain were able to break through Australia’s defences, they hit 43% from the field while also converting on 9-13 from the free-throw line with a couple of late makes from the charity stripe proving to be the nail in the coffin for the Gliders.

Having forced 12 turnovers in the first quarter alone, the Gliders were switched on and opened up a handy margin with eight players getting on the scoreboard.

The likes of Annabelle Lindsay, Shelley Chaplin (two points, two assists) and Hannah Dodd came off the bench to keep the pressure on Spain and showcase Australia’s depth as they pushed out to a seven-point advantage.

However, Spain responded late in the second term and capped their run near the half-time siren with a three-pointer to tie the scores at the main break.

They then carried that momentum into the second half, scoring 10 of the first 12 points to make it a 17-2 run overall.

Leanne Del Toso (five points, four rebounds) was able to stem the streak with a three-point play and Georgia Munro-Cook played some important minutes in a tense situation as the Gliders fought tooth and nail to get back into the contest.

That helped keep the deficit to a manageable five points heading into the last quarter and Cobi Crispin (six points, seven rebounds, three assists) and Amber Merritt (14 points, three assists, four steals) then cut the margin to one point early in the final term.

Spain responded to push the margin back out to what it was at the final change before Lindsay (six points, two assists) gave the Gliders one last glimmer of hope with a three-point play.

That made it a one-point game with only two minutes on the clock but the Gliders failed to score again as Spain secured a place in the quarter-finals while knocking Australia out.

View the box score here and watch the replay here.

The tournament is not completely over for the Gliders with two more classification games remaining to sort out the official final standings. Stay tuned to Basketball Australia’s social media channels for game time and opponent updates.

By Basketball Australia
Posted: 23/08/2018
Photo with thanks to MSSP Michael Schwartz / Uli Gasper