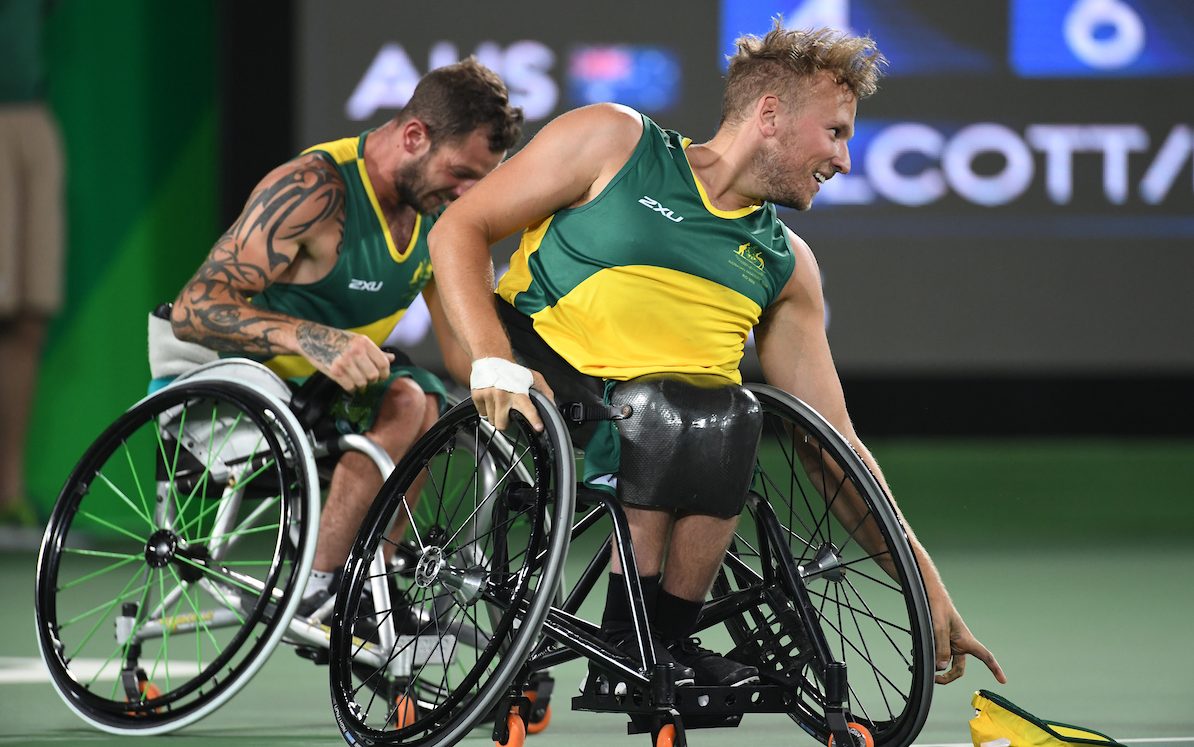 Dylan Alcott will take part in the first ever quad wheelchair tennis match at Wimbledon when he partners South Africa’s Lucas Sithole in an exhibition doubles event.

Dylan Alcott will make history at Wimbledon on Saturday as part of the first group of players to contest a quad wheelchair tennis match at the All England Club.

Official quad wheelchair singles and doubles tournaments are already part of the program of events at the Australian and US Opens.

Despite the Wimbledon match being classed as an exhibition, Alcott believes it’s is an important step in getting the quad division fully integrated into the tournament in future.

“First and foremost we have the ability and skill to play on grass. There was a misconception that it would be too hard, but it’s not true. It’s easy, and I love it out here,” he said.

“I’ve been lobbying to try and build the sport and to get our division in Wimbledon and to be here finally, it’s so cool. Although it’s only an exhibition this year, hopefully it will graduate to full tournament next year, singles and doubles.

“Mate, I’m just so stoked to be here. I think I look sexy in the whites, I normally wear my Melbourne black (laughter).”

Alcott has been accompanied in London by good friend and frequent doubles partner Heath Davidson, with whom he won quad doubles gold at the Rio 2016 Paralympics.

They hit for the first time at the All England Club on Thursday after practicing on the lawns of nearby Roehampton earlier in the week.

“‘Dream come true’ gets thrown around a lot, but it was. It was almost like an out-of-body experience for me there,” Alcott said.

“I’m not trying to sound like a legend but everyone said how hard it is (to play on grass), but it’s way easier than I thought. I expected it to be really tough. I’m lucky that I’m really fast in my chair, and things, but I love it – it suits my game. I’ve got good hands, and my topspin backhand – I was playing with Heath – it really kicks up.

“The vibe here, it’s so different to back home (at the Australian Open). We get 110,000 people on the Middle Saturday – it’s like a party. Here, it’s a party in a different way, a very posh party (laughter). So it’s cool to see the different dynamics.

“Obviously I love the Australian Open because it’s our home slam, but it’s also pretty unbelievable to get to experience this as well.”

For Davidson, his first visit to Wimbledon has been somewhat bittersweet.

The Aussie rose to a career-high ranking of No.4 in mid April but missed the entry cut-off for the four-player event.

Sithole has since slipped to No.6.

“I actually jumped up the rankings three days after the invitations come out so it was a bit shattering,” he said.

“Dylan asked me to come over and be his coach for the week. It’s the first time we’ve ever been here so I figured it would be a very good idea to come and an opportunity I couldn’t miss.

“Hopefully next year we can make this an official tournament and my ranking stays this high and I can actually play it.”