Tapper on the brink of making history 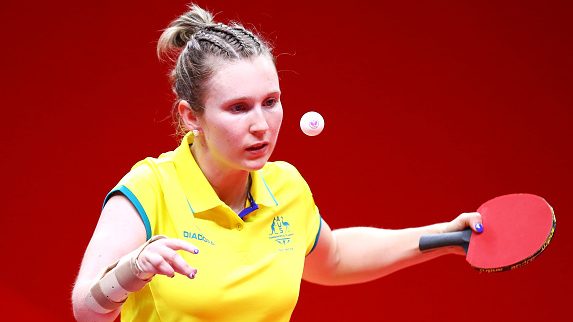 Melissa Tapper made history in Rio becoming the first Australian to compete at both the Paralympic and Olympic Games, and tomorrow she will aim to write a new page in the history book.

The Para-table tennis star claimed victory in today’s singles semi final, with a 3-1 win against fellow Australian class 10 athlete Andrea McDonnell (6-11, 11-3, 11-4, 11-4) and now has a chance to become the first Australian to win Commonwealth gold in table tennis.

And while the 28-year-old is thrilled to be in contention for her first gold medal at a multisport competition, she admitted the match was a tough one, not just physically, but mentally, having come up against her team mate and Gold Coast room mate.

“I am really relieved to have won,  it’s really hard having to compete against a team mate, but  I am very happy to have gotten the win and will now focus on tomorrow,” Tapper said.

Tapper was always the favourite to win the match, however it was McDonnell that asserted herself in the first set.

“That’s probably the best I’ve ever seen her play. She really took it to me in the first set, and I really needed to pull a few things out over the next three sets,” she said.

“The best thing for me was that the match was over five sets so I knew I had time to still work things out and sort things out, and sometimes that’s all it takes.

“If anything, she played so well actually that she’s definitely helped me feel more positive about tomorrow’s match.”

While there is a lot on the line for the two-time Paralympian tomorrow, Tapper said she will be playing one point at a time and focussing on the process to ensure the best result for herself and Australia.

She will be competing against Nigerian Faith Obazuaye, an athlete she had never seen play before these Games, let alone played against.

“I’ll be going over a bit of video tonight so I can start visualising what is going to be coming at me, but what may work in my favour is the fact that she hasn’t played me either.

“We’ll take it one point at a time, and we’ll fight really hard and see what comes of it.”

Haven taken on a massive schedule of able-bodied and Para competition, Tapper is confident she will be happy with her end result regardless of the outcome.

“Either way I will get to take a medal home, which will be really nice. I think that will sort of ease some of the nerves going into tomorrow’s match.

“Sometimes that’s the hardest part, playing so that you can secure something around your neck.

“I’m really excited for tomorrow. I just want to get out there, play as best as I can. It’s nice tomorrow that it’s not two Aussies, so we’ll have the crowd back in action again, and I’ll have my family there too. What’s better than that?”

McDonnell will enter the match brimming with confidence after her strong showing against Tapper.

“The first game I think [Tapper] took a while to hit her straps but once she did, she was very hard to stop. Even when you get three or four balls, she’s just very hard to miss. But I was just happy to be out there,” McDonnell said.

“It was very relaxed and Melissa’s a great friend of mine. We just thought we’d go out and have fun. After the match, she said, ‘You scared the sh*t out of me in that first game’.”

McDonnell has never a medal at a major international event.