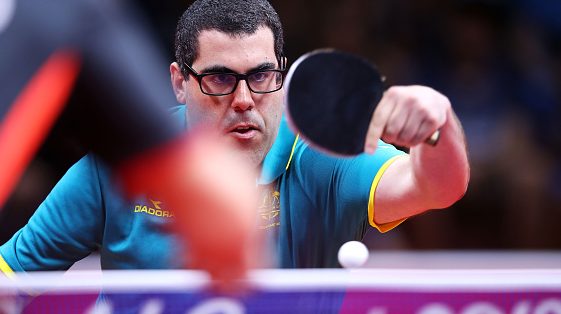 Australia’s Para-table tennis athletes are on track for success, winning all three matches on the second day of their tournament.

Melissa Tapper, who is gunning for Australia’s first Commonwealth gold in the sport, defeated England’s Felicity Pickard in three sets (11-6, 11-2, 11-1) in just 16 minutes.

Although it seemed to be an easy victory for Tapper, the class 10 athlete she had to work harder than in her first match yesterday.

“In the first set, Felicity played really well actually and wasn’t missing many balls, so I had to really try and step it up in the second and third set to make sure I could start playing some good table tennis.”

Tapper’s team mate Andrea McDonnell won her match against Canada’s Stephanie Chan in a clean sweep, but admitted it was always going to be a tough match to win.

“I was a bit nervous coming into that match because she got fourth in Rio in class 7, so I knew she could play pretty well,” the class 10 athlete said.

The third Para-table match for Australia was contested by Rio 2016 Paralympian Barak Mizrachi, who, after a loss in his first round yesterday, was able to pull himself back up to grasp a win against Nigeria’s Temitope Ogunsanya.

“It was good to get a win and great to rebound today. It was nice to have a crowd watching me on the match courts today.

All three will contest their final pool games tomorrow, ahead of the semi finals on Friday.