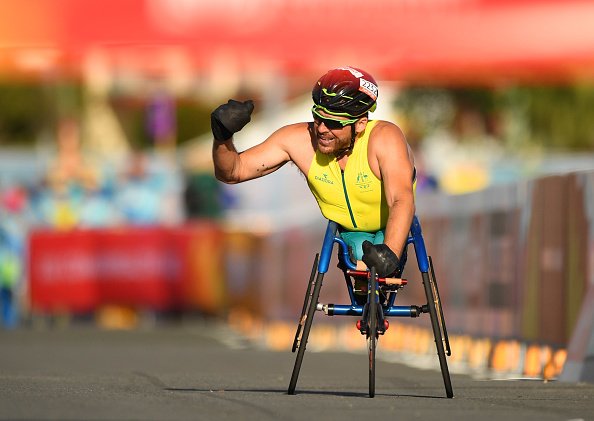 In search of a fairy tale ending to his remarkable career and with the expectation of a host nation on his shoulders, Kurt Fearnley did what he does best. He found a way to succeed.

The Paralympic legend won the gold medal in the men’s T54 wheelchair marathon at the Commonwealth Games and then confirmed it would be his last race in the Australian green and gold.

“That’s it, mate.” Fearnley said. “All I kept thinking all week was that I had received so much from so many people and all I can do is go out there and hurt for them.

“It doesn’t get better than that.”

Fearnley’s intent was clear from the gun. He broke away from the bunch in the second kilometre and made sure he rode the wave of rapturous support from the thousands of fans who lined the Gold Coast streets.  His victory could not have been more emphatic.

He crossed the finish line in a time of 1:30:26, a new Games record, and was soon embraced by his wife Sheridan, his two children and a huge group of family and friends. The emotion of the occasion was immense.

“When you see the emotion on the faces of your family and sharing that with people, it’s just full-on. The thought that you can be a part of people feeling so much joy, it’s just overwhelming,” Fearnley said.

And while it signalled the end for Fearnley’s Australian representation, the women’s T54 race heralded the arrival of a new Australian star in wheelchair marathons.

“It’s an amazing feeling. I didn’t know what was going to happen. This is my first Commonwealth Games and to do it in front of a home crowd is incredible – they were amazing,” De Rozario said.

“So many people knew everyone by name – I’ve never raced a race like that before. Australia definitely turned it on today.”

The Aussie duo fought a fierce battle with Jones and Scotland’s Samantha Kinghorn. The quartet raced as a bunch until less than three kilometres to go.

De Rozario said she was frustrated by the conservative pace as the 40km mark approached and felt it was the time to apply some pressure. And while it was nerve wracking to make the break, and earlier than she expected pre-race, she was confident in her ability and her sterling form. The gamble paid off.

“The last thing Lou [coach Louise Sauvage] said to me before the race was ‘remember that you’re fit’ and that was a message about  backing my own fitness and knowing that if I made the break, I could keep it. I’m glad it worked.”

For Ault-Connell, the silver medal continued her impressive comeback to the sport after her previous Commonwealth Games appearance in 2006. Racing in front of her family, included her three children aged nine, seven and six, Ault-Connell immediately stated her intention to push for gold in Tokyo 2020.

“I didn’t think this would ever happen, it kind of came out of the blue,” Ault-Connell said.

“It’s been over 11 years since I competed and I’ve now got three children. I wanted to come back and show them you can do anything.

“I absolutely loved being out there today, it was a great reminder of what I love doing. I fully intend to continue doing that.”

“Everybody deserves nothing, if you want it, you have to work for it,” Fearnley said.

“You’ve got to be fierce and that was as fierce as I’ve ever been.”