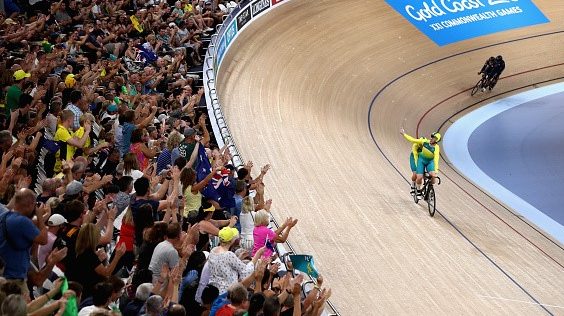 Securing themselves a spot in the bronze medal race after losing their semi-final to Scotland early in the day, the pairing landed themselves another victory against Malaysia’s Muhammad Afiq Afify Rizan and pilot Muhammad Khairul Adha Rasol.

“I’m feeling pretty good, we achieved the goal we set out to achieve.” Henderson said.

“Throughout the race I was trying to pick up on cues from Tom, and focussing on getting the result we wanted.”

Now that the pair have achieved exactly that, Henderson said Tokyo 2020 will most definitely be on the horizon.

In the women’s event tonight, Jessica Gallagher and pilot Madison Janssen competed in the time trial but had a repeat of results from day one of competition.

In the same situation as their sprint, the duo were racing for just one medal but were defeated once again by England’s Sophie Thornhill and pilot Helen Scott, who were able to set a new world record of 1:04.623.

While it the loss means that Gallagher and Janssen will now not be able to bring home a medal from the Gold Coast 2018 Commonwealth Games, the two are celebrating an “incredible ride” having set a Games record of 1:07.165, only to be broken soon after.

Speaking of not being able to secure her goal of claiming a medal at the Games, she said:

“It’s heartbreaking. We competed at the World Championships a few weeks ago and won two silvers. To come to this Commonwealth Games, and not get a medal – that was a choice they (the organisers) made.”

Photo with thanks to Getty Sport