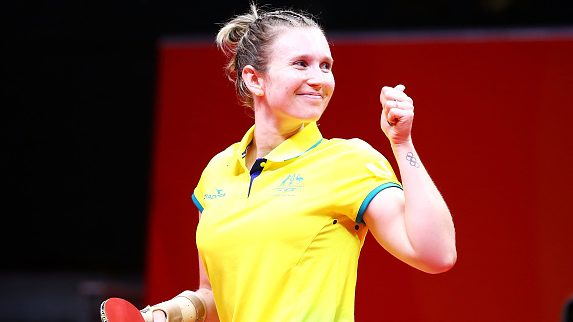 Two-time Paralympian Melissa Tapper makes no secret of wanting to win Australia’s first Commonwealth Games gold medal in Table Tennis, and her intent was on show in the opening match at Gold Coast 2018.

In the mixed 6-10 class competition,  the Paralympian (class 10) who also competed at the Rio Olympic Games was able to take down class 6 athlete Maitreyee Sakar from India in a staggering 12 minutes.

“It’s always nice to have the first match of the singles out of the way,” Tapper said.

“I’m happy with my performance but I’ve got to keep building on it to win that gold medal.

“Every time I’ve played here, it gets more amazing, and it’s absolutely incredible to be able to play in front of a home crowd.”

In other results today,  Melbourne’s Barak Mizrachi suffered a loss in his opening match against England’s Ross Wilson (11-4, 11-8, 11-5).

“I’ve played him a few times before, and he’s a tough player. I was always going to be hard pressed to win that one, as well as having to play in front of a home crowd,” he said.

“It’s a great experience, but you’ve got to keep your eyes low and keep focussed.

“I’ve just got to try and rebound for my next two matches and push for a semi final berth.”

All three will continue their group stage tomorrow, ahead of the semi finals this weekend.

Photo with thanks to Getty Images