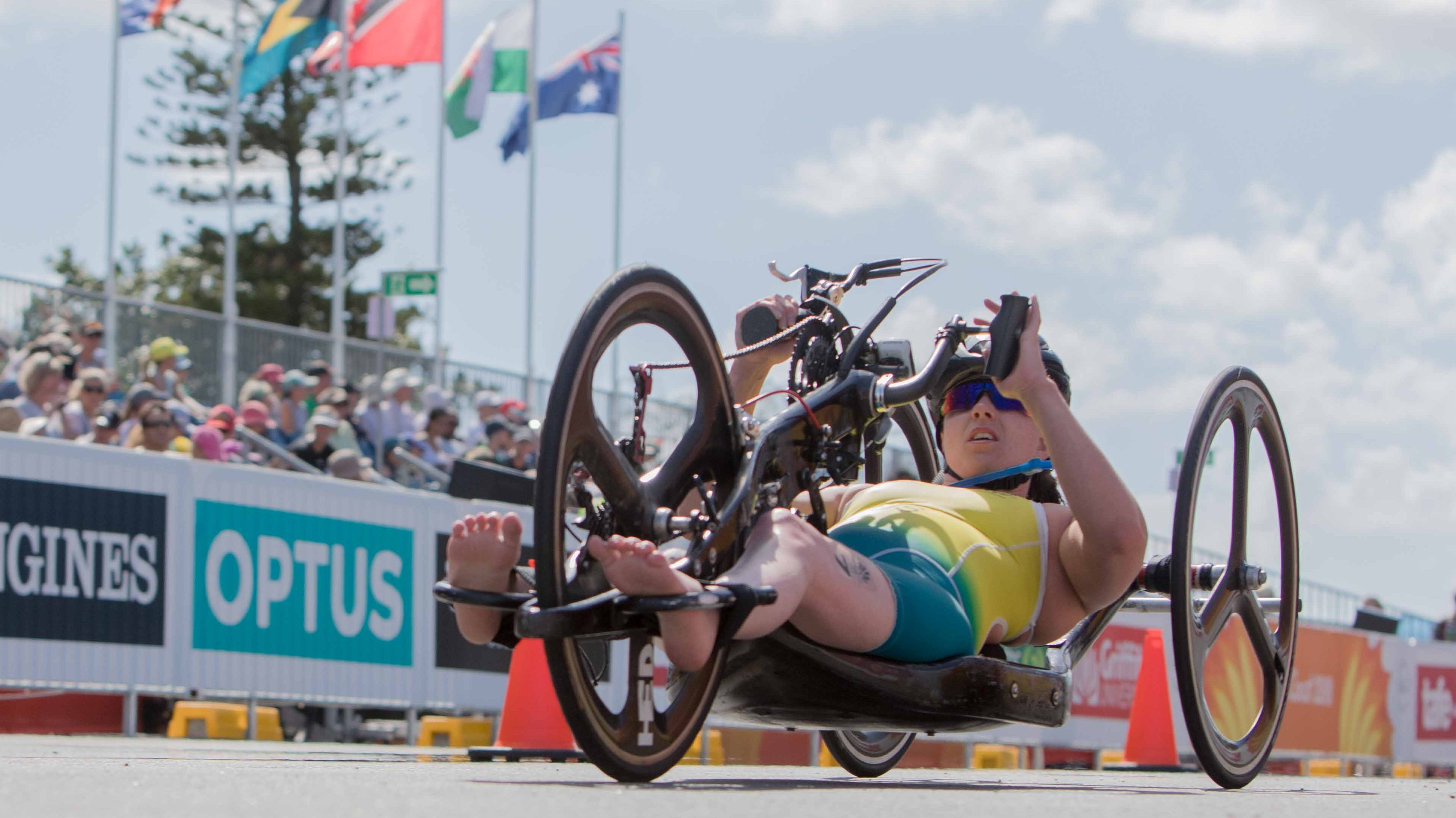 An Australian legend bowed out with a podium finish and the next generation of stars shone in the Para-triathlon, with the home nation taking four of the six medals on offer today at the Commonwealth Games.

England did their best to rain on the Aussie parade though, with Joseph Townsend (1:02.39) and Jade Jones (1:11.07) both stealing the lead for the first time during the run leg before storming to victory.

An emotional Beveridge said it would take a while for him to process his outstanding result.

“Your body takes so much stress in triathlon training and to be able to put together a performance like this, it would have to be a personal best effort for me,” the Queenslander said.

“Anything can happen in a triathlon, the margin for error is huge, especially under fatigue. The more intricate things can make it easier to make a mistake.

“I knew I just had to keep myself in the race and keep hitting the rims hard and trying to do the best I could to stay in there and just see where I finish up.”

For Chaffey, the race brought to an end a glittering international Para-triathlon career in the green and gold, but it wasn’t the fairytale finish he dreamed of.

The five-time World Champion crashed into a fence on the bike leg, sustained damage to his handcycle and had to push the final two laps with no left hand pedal and an inability to change gears due to a broken cable.

The wounds to his hand and arm after the race were substantial. His toughness is undeniable.

But as ever, there was no one harder on Chaffey for the mistake he made than the man himself.

“I don’t know whether it’s bad luck or just sheer stupidity. I went round that corner twice and it was fine. But I knew Joe [Townsend] was catching me and of course, the pressure got to me, I cooked it too hard and I stuffed up. I’ll live with that for the rest of my life,” Chaffey said.

“That’s racing. Sh*t happens. Part of triathlon is staying upright and I didn’t do that.

“I always knew this would be my last international race. I’m happy to be known as someone who never gives up and gives their all every race, I showed how I can keep going.”

Tapp and Parker both stated their intention to push hard for their Paralympic debuts in Tokyo 2020 after today’s race, fought out in blazing sunshine and in front of a raucous home crowd.

It was Parker’s first international Para-triathlon at a major event, just one year after a horrific accident which resulted in broken ribs and shoulder, a punctured lung and spinal cord damage.

“I’m so proud of myself, I’ve come a long way since my accident and to be here today makes me really proud,” Parker said.

“To come away with a bronze medal just tops it off.”

The Aussie duo were defeated by former England Para-athletics racer Jones, whose expertise in the run-leg was evident when she mowed down her rivals and blazed home.

Tapp knew she had to put the biggest possible gap between her and Jones in the swim and cycle legs and do her best to hold on.

“As an elite athlete, it is always disappointing not to be on the top. I won’t say it’s a complete disappointment because I gave it everything I could,” Tapp said.

“[Jade] is an incredible athlete. She has competed in track [athletics] since she was 16 and I always knew she would be fierce in the run leg. Congratulations to her, I’m looking forward to many more races with her.

“It’s done now. It’s going to take some time to process this. It’s back to the drawing board. But for now, it’s time to celebrate with family and friends.”

Tapp was also quick to praise the performance of new teammate Parker.

“I am shocked, it’s surreal,” Tapp said of Parker’s rise. “She is a weapon on her bike, she just drills it into me so it’s exciting to have competitors like Lauren and Jade on the course. It’s exciting to see the direction Para-triathlon is going.”

Scott Crowley (fifth) and Sara Tait (sixth) were the other Aussie Para-triathletes in action today.