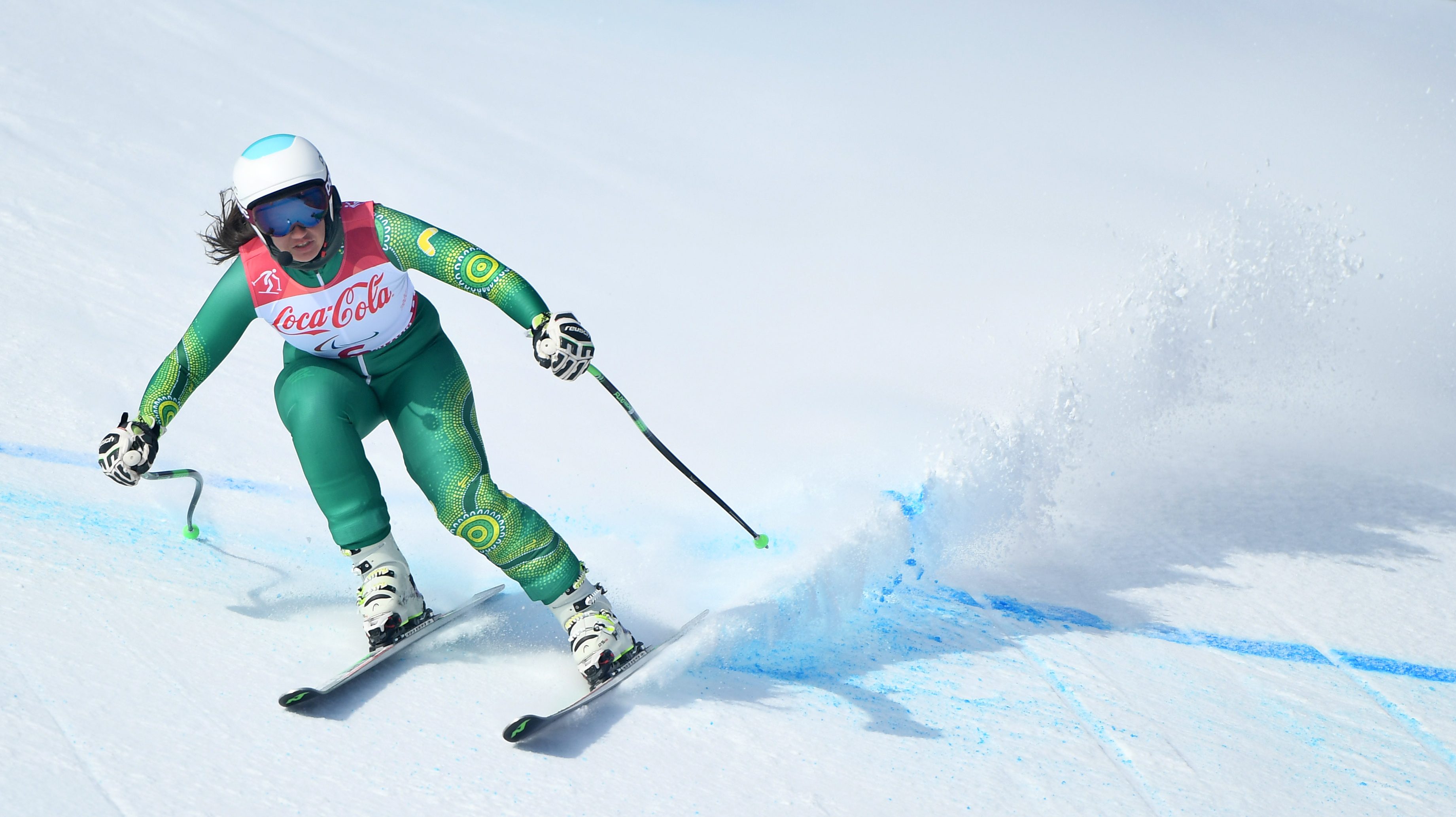 Tori Pendergast let a medal slip from her grasp at the PyeongChang 2018 Paralympic Winter Games today but she still came up with the best Downhill result from the six Australians who took to the Jeongseon Alpine Centre course.

Under sunny skies Pendergast was having the run of her life at her first Paralympic Downhill event, clocking intermittent time checks in silver and bronze medal contention.

But two-thirds of the way through the course her sit-ski slipped too much to the left. She righted herself and made it down the hill. But the seconds lost proved valuable placing her fourth – just outside the medals.

“I just lost my balance through that triple,” Pendergast said of a section in the course. “It was a bit bumpy through that area, and if you lose your edge on a sits-ski it’s quite hard to recover from it.

“I guess I’m just happy to get this one out of the way given it’s the one I’m most nervous about, especially with the speed. I’ll take the good bits from this and come into the Super G tomorrow.”

But knowing how competitive she was on the clock, before her slide, will play on her mind just a little.

“That hurts. That does hurt to know it was so close. But it’s just one of the risks of the sport,” the 27-year-old said.

“It’s a bummer but you just take the good things from that (race) and bring them into tomorrow (Super-G).”

“Tori came within a bee’s dick of a medal,” Dean said.

All up the Australians on day one of competition in Para-alpine had two top-five finishes, a top-15 with Sam Tait (NSW) 11th from 26 runners in the men’s sit-ski class, a 22nd from Jonty O’Callaghan (Vic) in men’s standing class, and two DNFs (did not finish) – all in Downhill.

“I was relieved because I’m always extremely anxious before downhill because it’s the most dangerous and tricky disciple,” Dean said.

“OK, we didn’t get a medal but I think all in all it’s the first day, everyone’s done pretty well, so I reckon they’re probably pumped for tomorrow. For Tori, people were falling over but she just went for it. Similarly with Sam and Mark (Soyer).”

Tait was hoping for a top-15 finish in his event. So to come up with a near-top result brought a wide smile.

“I just wanted to lay down a good track today to try and relax myself for the rest of the week,” the 26-year-old sad. “Hopefully I’ll be able to put down more better runs.

I’m stoked with that though.”

Soyer (VIC) is the second Australian male in the sit-skiing events, where the athlete straps himself into a structure affectionately called ” a bucket”. That then is attached to a mono ski through a suspension coil or frame.

The 39-year-old was again the victim of his equipment letting him down. During a training run on the course last Wednesday, his binding snapped off in a crash. Today before the start of the Downhill final, his frame did not fit into the binding properly.

“When they obviously drilled it last night they drilled it too short. So we actually couldn’t fit into the bindings.”

Soyer said he was frustrated but would sort it out with the Australian ski technicians back in the Athletes Village.

“It’s obviously a disappointment but nothing too bad because we’ve got tomorrow” he said. “Obviously I had some equipment issues, once again, which is getting a bit frustrating. But we’ll deal with it and be back tomorrow.”

Alongside Pendergast, the other top-five finish was Melissa Perrine (NSW) in the women’s vision-impaired class, alongside her guide Christian Geiger.

Perrine had finished with a bronze in the World Cup event held on the same PyeongChang mountain 12 months ago, and was a medal contender again today. But she just couldn’t maintain the speed needed to push for a podium spot.

“It didn’t go according to plan but it was an improvement on the training run. I had a couple of key mistakes in areas that I probably couldn’t afford to lose the speed, which is probably what ultimately cost me the podium position that I was after,” said Perrine, who is at her third Winter Paralympics.

“But it was an improvement so I’ll take the positives and work on that for the race tomorrow.

“Downhill’s always the most nerve racking. It’s the fastest, most dangerous. It’s the one that gets your blood going. You love it and you hate it at the same time.”

The nerves might have been frayed a little more knowing her parents Denise and Ronald were in the Jeongseon Alpine Centre stands watching her race at a Paralympics for the first time.

O’Callaghan, who has cerebral palsy affecting the right side of his body, was the third of the Paralympic debutants but made his way successfully down the 2,356-metre course.

“It’s unbelievable. It’s a big relief just to be here and get down. It always could be better but with my lack of experience, I’m happy with how I went,” the 20-year-old said.

“I know we ran the course earlier in the week but I really tried hard not to put too many expectations on it. For me, I prefer the tech events so the plan was for me to go as best as I can in the speed events and really go for it in the tech.”

Australian team co-captain Mitch Gourley wasn’t as successful negotiating the terrain and after a sharp turn, he went outside one of the Downhill gates taking him off-course.

“I obviously missed the gate there but I’m really happy with what I did, really happy with the intent, that I rolled up here and had a crack even though I couldn’t see that gate,” said Gourley, who was one of five skiers from the 29-strong field not to finish.

“I’ve got to take this to be fast on this hill, it’s not a great hill for me and I’ve got to really push the line and take risks, and I did that and committed to the plan and unfortunately I was three feet to the left of where I needed to be.”

Gourley, a lower left arm amputee and also at his third Paralympic Games, said since he was a smaller build than others in his standing class, he liked a faster course.

“The hill, it’s just a bit flatter than what I’d like,” the 26-year-old reigning world champion in Super Combined.

“I’m a little guy and I’m in a low impairment class so the harder the better for me, and this one, it’s a challenge for me in some ways but it’s not super difficult physically. It’s not super steep, there’s no big jump or things like that.”

The six Australians will be back for Super-G tomorrow (Sunday) with the Super Combined to follow on Wednesday.