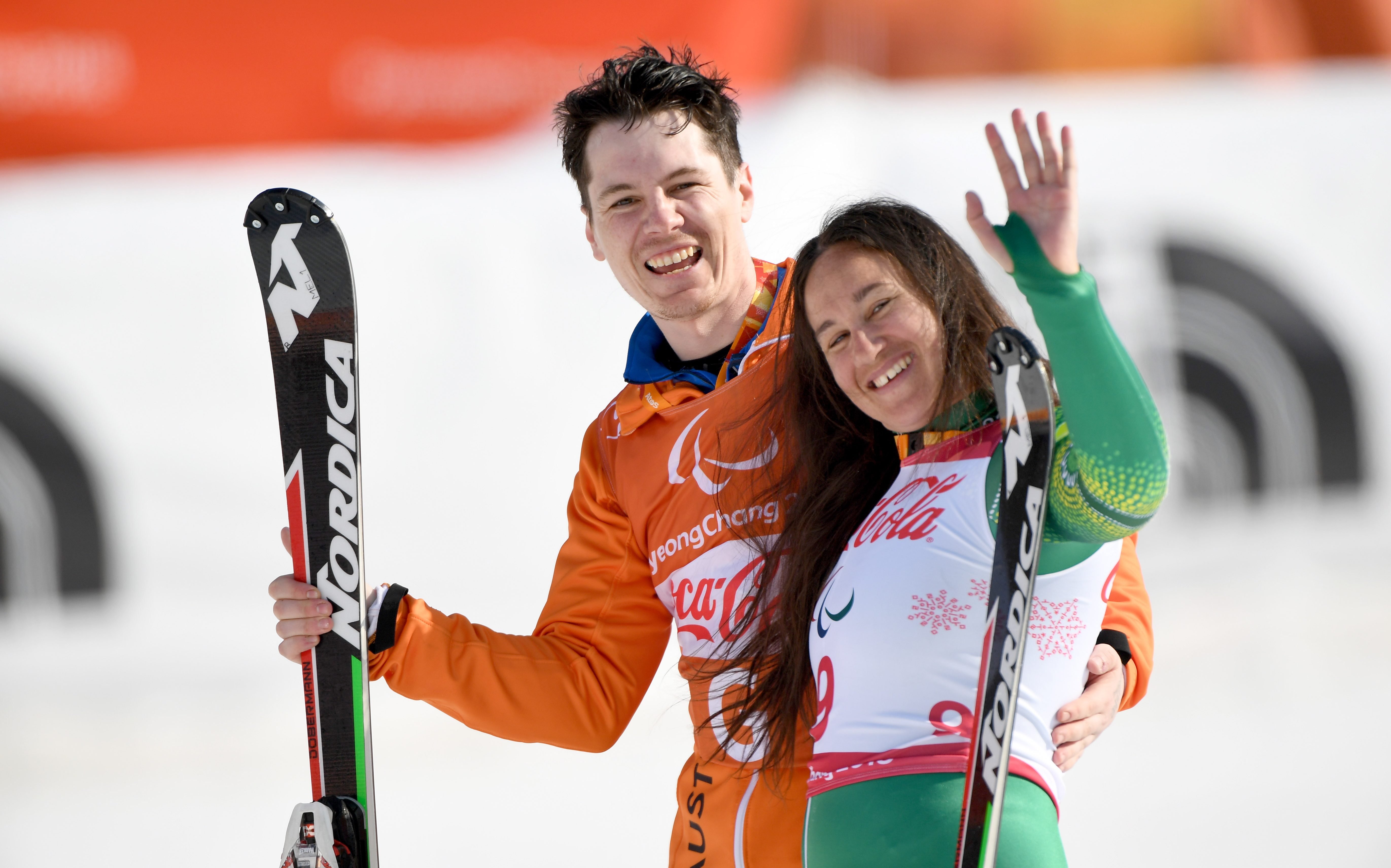 The Perrine-Geiger team were in sixth place after the super-G component of the women’s super combined Visually Impaired in the morning, and then nailed the slalom course in the afternoon to win bronze behind Henrieta Farkašová (SVK) taking gold, and Menna Fitzpatrick (GBR), the silver.

“That was some Slalom run she laid down there today,” said Australian teammate Mark Soyer, who missed a gate in his sit-skiing class for a DNF (Did Not Finish) but could still find some joy in Perrine’s achievement.

After empty campaigns in 2010 and 2014, Perrine is now a Paralympic medallist – a month after turning 30.

Happiness swept over her immediately.

“That’s an understatement,” Perrine said, when asked to describe her emotions after waiting so long for Paralympic success.

“Relief, I guess. Elation. Just so happy right now. I’m stoked that it was enough to get on the podium and I’m so excited for the next two races.”

Giant slalom and slalom await to finish off the five-event Paralympic program for 2018.

But first, let’s reflect on what Perrine’s track record has been like before winning Paralympic bronze.

She emerged on the international scene in the 2009-2010 season. After winning 35 World Cup medals, including six gold, and eight World Championships medals (three gold), expectation has always been on Perrine’s shoulders when a Paralympic Winter Games rolled around – sometimes unbearably so.

“She’s had some bad luck but it’s just made her stronger,” said her mother Denise, after embracing her daughter following the race.

Mrs Perrine, dad Ronald and brother Nick have come to South Korea from their home in Mittagong, and must have been the lucky charms she needed.

“My family have never seen me ski before and it’s the first time mum’s been overseas. It’s a miracle that she can be here and it’s so great they’re able to see it,” she said.

“They’ve sacrificed so much and given me so much throughout my life. They and my brothers and everyone back home, my entire extended family, they’ve just been amazing my entire life and I’m so happy they can be here to share this.”

The hug Mrs Perrine gave to Geiger, who skis in front wearing a bright orange bib , was almost as long as the one she saved for her daughter. Perrine and Geiger communicate on the course via headphones in their helmets.

“This guy has unending faith in me and he has turned me into a bit of a technical skier,” Perrine said. “I started off my career as a downhiller, a speed skier, but he’s resolutely turn me into something I never thought I’d be.

“He’s a great friend and an awesome guy and an even better coach.”

It was almost a double medal celebration for Australia today, as Mitchell Gourley set a smart super-G time to finish in third place heading into the slalom section of the men’s super combined Standing. But a shift in courses to different snow on the Jeongseon Alpine Centre hill threw him a little.

He ended up fifth behind gold medallist Aleksei Bugaev, who won this event in Sochi four years ago for Russia, but is competing for the NPA (Neutral Paralympic Athletes) in PyeongChang.

Gourley was also fifth in the super combined at the Sochi 2014 Paralympic Games, and is the current world champion in his class, winning in Tarvisio, Italy, in 2017.

“I just never really got into the rhythm, the snow broke down a bit and I just didn’t know how it was going to behave,” Gourley said. “I didn’t trust it essentially.

“I didn’t put myself in a position to win that race and that’s what hurts the most. I can take some good things out of this morning and move into tomorrow.

“I was really happy with that super-G run and you know, it’s a strange one for me. In combined, I’ve usually been coming from behind in the slalom, and to be in a position like that was probably a bit new to me.

“I let it get the better of me a little bit and it is what it is. I’m here to put down turns I’m proud of.”

Just like the super-G event two days ago, it was a 50 per cent pass rate for the six Australian Para-alpine skiers today.

Three made it through another super-G run to stake their starting spot for the slalom – Perrine, Gourley and Soyer.

But sit-skiers Tori Pendergast and Sam Tait, and Standing class skier Jonty O’Callaghan did not qualify for the second run. In total, 33 skiers from a super combined field of close to 90 didn’t make it down, as the 12-degree snow conditions created havoc once again.

Pendergast did actually complete the 2,044m course in eighth place, but suffered stomach cramps throughout and withdrew from the slalom after talking with Australian team doctor Geoff Thompson. She has been suffering from a gastric illness.

Tait and O’Callaghan were disappointed but remain determined with still two events to go in PyeongChang.

“It was a fight the whole way down,” 26-year-old Tait said. “I just came over the pitch in that single turn and got caught late for the next one. I fought to get back but got bumped. I came up again and tried to get back into the rhythm but I couldn’t.

“Then I thought, ‘Nah, I’m not finishing 15 seconds back and then doing a slalom’,” he added, as his poor time placing would have given him little chance to scratch his way back into the top 10. He finished 11th in the men’s downhill Sitting last Saturday.

“It’s all good experience. I would have liked to get close to the top 10 again because I think I am more a speed, downhill person. And in these conditions it’s very tough for everyone who thinks like that.”

He will take some time off, get back into the gym, and then get to the NSW and Victorian ski fields for the Australian season before heading back to Europe and North America for the 2018-2019 World Cup season starting in November.

O’Callaghan just wished he could have conquered the super-G runs at Jeongseon Alpine Centre – he was 22nd in the men’s downhill Standing but had two DNFs in super-G racing.

“You just get your head around it and find a way to move on,” said the 20-year-old, who has cerebral palsy.

“But it’s not an easy thing to do. The first time you can sort of write off as an anomaly; the second time means there’s a bit of a pattern and you sort of have to look at yourself a bit more.

“I am pretty hard on myself in terms of my results but you have to be in order to get the best out of yourself,” O’Callaghan said.

“I just wish I had more of a chance to show my skill,s but unfortunately that didn’t happen today.”