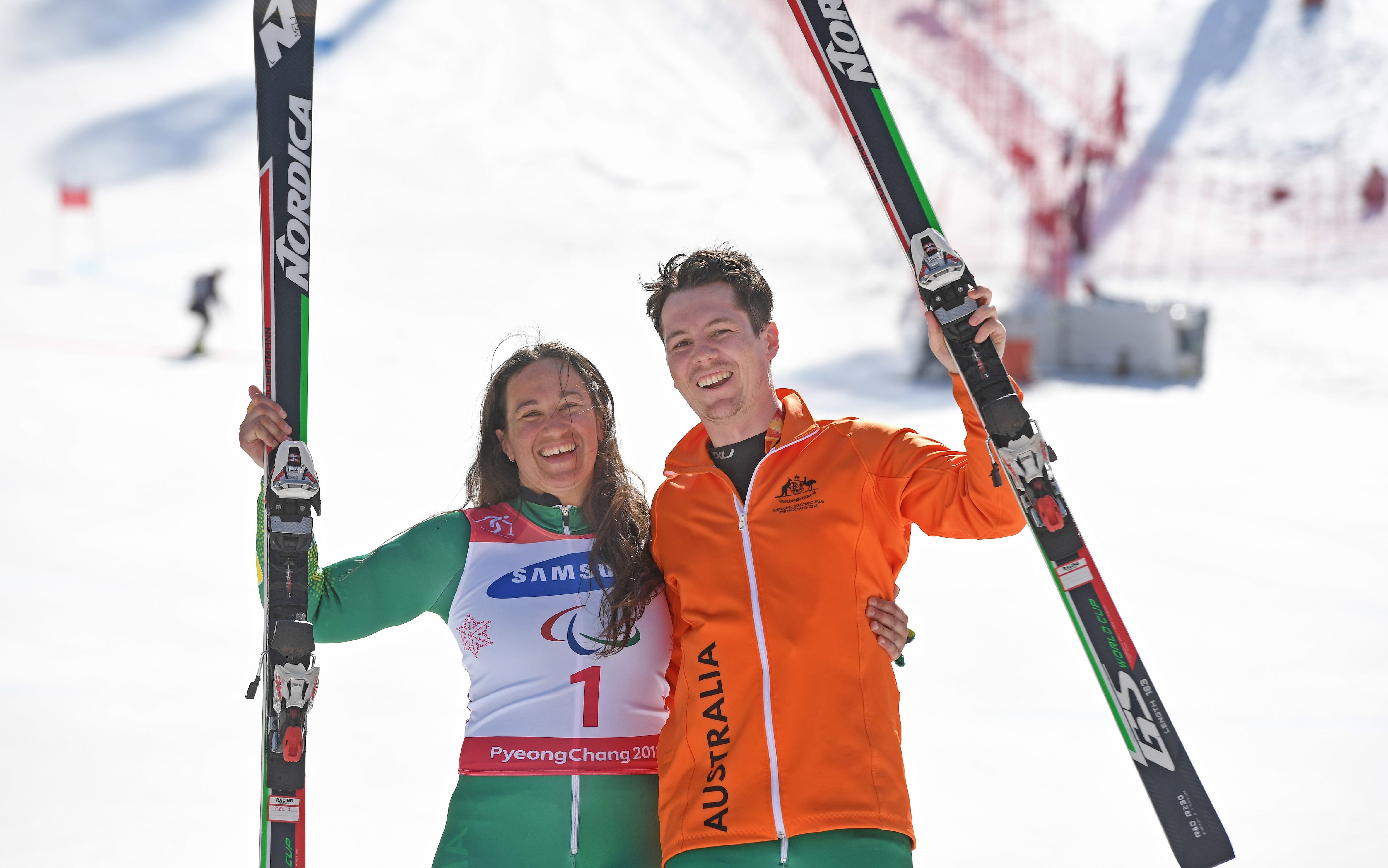 She has single-handedly increased Australia’s medal tally by two-thirds with her efforts over 24 hours. Her two medals, combined with Para-snowboarder Simon Patmore‘s gold brings the Australian medal tally to three.

The 30-year-old from Mittagong in the NSW Southern Highlands, along with sighted guide and coach Christian Geiger, landed the women’s giant slalom Visually Impaired bronze in two solid runs at the Jeongseon Alpine Centre today (14 March).

After two Paralympic campaigns in 2010 and 2014, when the well was dry, the floodgates have opened for Perrine in South Korea.

And it could have so easily been silver, as she finished 0.47 seconds behind Menna Fitzpatrick [GBR]. Henrieta Farkašová [SVK] took the gold – her fourth at the 2018 Games.

“I’m so stoked the skiing was able to get me a medal, so I’m really happy with the skiing today.

“I love this sport, it’s an amazing sport. I wanted to relax and have a lot of fun out there today and I managed to do that,” said the woman who has won 35 World Cup medals and eight World Championships medals over the past eight years. Now she has two Paralympic medals to add to the collection.

“It was definitely a sense of relief. I had relatively decent World Cup form going into Sochi [the 2014 Paralympic Games] and had a lot of bad luck,” she said.

“I’m really relieved that the work we’ve done on consistency over the past couple of years has paid off. This time I’ve been able to transition my World Cup form into the really big, major competition form.”

Perrine made her Paralympic debut at the same time as PyeongChang 2018 co-captain Mitchell Gourley.

“I’ve seen the work she’s put in over a long, long time. It’s nice to see her bring it on the biggest stage.”

All eight Australian Para-alpine skiers competed in the giant slalom today, and all eight made it down both runs, which was no mean feat in the soft Spring-like snow in the morning, transitioning into more icy conditions in the mid-afternoon.

Perrine and Gourley (eighth) were joined by sit-skier Tori Pendergast (eighth) in the top 10.

“Halfway through, one of my outriggers [cut-down ski poles] went in a random direction, so it was a really big fight to try and grab it. Once I did, I just tried to ‘go’ and make up the time. After an average run this morning, I’m happy with that to end the day,” said Pendergast.

“I started off today with a first run which was kind of passive,” Tait said of the tricky snow conditions.

“I think I was skiing just to finish. And then second run I thought, ‘Stuff this, I need to attack it more’.

“It just felt tighter, faster, better and I managed to jump five spots [in placings].”

It might have been halfway through the Paralympic program – day five – but it was debut time for both Pianta and Jensen.

PyeongChang is their first Games, so it wouldn’t surprise if butterflies were present at the start gate.

“It’s weird, I didn’t feel too nervous before the run,” Jensen said. “While I was skiing the nerves did kick in a bit. It wasn’t the best skiing by me, but far away from the worst, so I’m happy.”

He paid credit to guide Lara Falk for helping smooth the way in his first Paralympic event.

“It feels absolutely incredible. It’s a massive honour to be here wearing the Australian colours with her. Didn’t expect to be here about a year ago.”

Pianta, who tore the anterior cruciate ligament in his right knee in just seven weeks ago, didn’t expect to get within cooee of South Korea after that training mishap.

“So it’s great to turn that on its head. To get this experience and opportunity is incredible. Finally, it does feel real. During the whole build-up, it hasn’t really felt real – but now with the crowd, all the atmosphere, it’s amazing.”

Sighted guide Jeremy O’Sullivan was by Pianta’s side during his intensive rehabilitation.

“He’s a fighter. He never gives up,” O’Sullivan said.